Statement of TESDA Secretary Isidro Lapeña in support of NTF-ELCAC 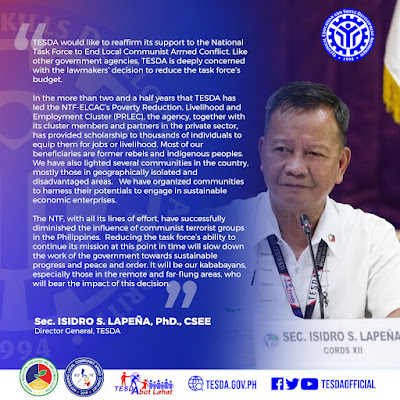 The Technical Education and Skills Development Authority (TESDA) would like to reaffirm its support to the National Task Force to End Local Communist Armed Conflict. Like other government agencies, TESDA is deeply concerned with the lawmakers’ decision to reduce the task force’s budget.

In the more than two and a half years that TESDA has led the NTF-ELCAC’s Poverty Reduction, Livelihood and Employment Cluster (PRLEC), the agency, together with its cluster members and partners in the private sector, has provided scholarship to thousands of individuals to equip them for jobs or livelihood. Most of our beneficiaries are former rebels and indigenous peoples. We have also lighted several communities in the country, mostly those in geographically isolated and disadvantaged areas. We have organized communities to harness their potentials to engage in sustainable economic enterprises.The NTF, with all its lines of effort, have successfully diminished the influence of communist terrorist groups in the Philippines. Reducing the task force’s ability to continue its mission at this point in time will slow down the work of the government towards sustainable progress and peace and order. It will be our kababayans, especially those in the remote and far-flung areas, who will bear the impact of this decision.
Posted by Boy Raket at 2:00 PM