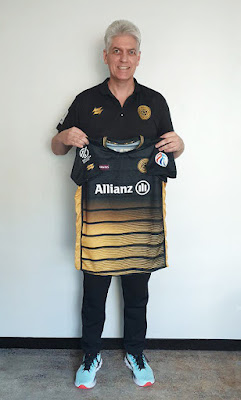 United City Football Club (UCFC) announces Gravity Sport as its official blockchain partner in another landmark sponsorship deal for an Asian football club.UCFC becomes the first Asian football club entering into a fully executed commercial & technology partnership with Gravity Sport. This consumer-focused universal blockchain solution enables sports teams to build & monetize content, data security, and entertainment in a custom-built digital asset ecosystem. Gravity Sport has previously signed a partnership with Italian side Parma Calcio.With the rise of blockchain, NFTs, and metaverse in the country, UCFC is positive that this partnership will pave the future of football and how fans will have ownership of the club's collectibles and put a new meaning to tokenization."We are proud to have reached another milestone in our vision of how we think Club football not only in the Philippines shall evolve over time, and we would like to thank Gravity Sport for its vision to see the potential in partnering with UCFC as well as Orchid Sport & Entertainment, which helped us to complete the deal." States Eric M. Gottschalk, President of UCFC."We will be the first regional football club to integrate blockchain into its operations from merchandise, membership, data analysis & security. Therefore, it allows our fans to get closer to the players through our dedicated fan tokens and exclusive NFTs, which will be launched ahead of the 2022 season".Through the Gravity Sport blockchain technology and NFT marketplace, United City will be able to create innovative fan-owned assets such as exclusive digital player cards, including interviews, match highlights, and goals scored. Such assets can be obtained using the unique UCFC fan tokens and can be traded among fans."The partnership with Gravity Sport and the use of blockchain technology will allow UCFC to make another step forward in unlocking new revenue streams and to become a sustainable football business that does not rely purely on match-day revenues or sponsorship income alone," states Gottschalk.Also, it will connect to new global audiences with mass adoption, delivering next-generation adoption & future-proofing engagement.As a digital economy enabler, Gravity Sport commercializes, hosts & operates the complete platform in partnership with the rights holder."Gravity Sport is tremendously proud to add United City FC to its growing portfolio of international sports properties, following our jersey partnership with Parma Calcio in August, "commented Stuart Gallacher, Founder at Gravity Sport."The Philippines is a very interesting market for us as the country is poised to reach new economic heights in the near future while its young, tech-savvy population is naturally equipped to easily grow into the new area of "blockchain technology"."And just like us, UCFC is fast evolving, has a clear, futuristic vision while displaying strong values which assures that our ambitions are closely aligned. We are excited to innovate jointly with UCFC as we believe we have an incredibly exciting global blockchain NFT marketplace which will benefit all stakeholders, players, media, and of course the strong fan audiences that UCFC already has."The Gravity Sport partnership is extended across all the UCFC football and esports properties, and while effective immediately, it will fully kick off early next year alongside the 2022 season.***
ABOUT UCFC: United City Football Club (UCFC) is a SEC registered Filipino Professional Football Club that aims to promote and build values such as equality, diversity, leadership through sports.UCFC is a member of the Philippines Football League (PFL), the Philippines' professional level of men's club football in the country. The Club is currently the 4x defending national champion in the PFL and the first Philippine team to qualify and to win a match on the AFC Champions League level when the team featured against Beijing FC during the AFC Champions League Group stages in Tashkent, Uzbekistan.As a mission, the Club stands to help re-invigorate young athletes, families, and the local community through discipline, hard work, and passion. The ambition is to be the best of the best in Asia - be it on the football field, esports, or within the community - and provide a pathway and equal opportunities for the next generation of young talent in their pursuit of sporting & educational excellence.The Club recently announced its move to the Pampanga / Tarlac region, where it plans to set up its youth football academy in Clark City and to and build its football stadium while making use of the already existing stadium facilities in New Clark City in the meantime.As part of the move, United City FC will be renamed to United Clark FC by the end of 2021, while its Esports division will simply be called UCFC Esports.The UCFC Esports division was successfully launched in June 2021 and currently features three professional teams participating in titles such as Valorant, League of Legends: Wild Rift as well as E-football (PES / FIFA), with more teams such as "Mobile Legends" etc. to be added in 2022.
Posted by Boy Raket at 11:00 AM