Be summer ready this 2020 with the XTREME Summer Xtravaganza Promo!
Get up to Php 3,995 worth of item (TV, Microwave oven, or rice cooker) when you purchase
select products from XTREME from March 1, 2020 to May 31, 2020!
WHAT: XTREME Summer Xtravaganza Promo
WHEN: March 1, 2020 to May 31, 2020
WHERE: XTREME Stores Nationwide
How: Get a free item when one you purchase select XTREME Appliance
Promo list: 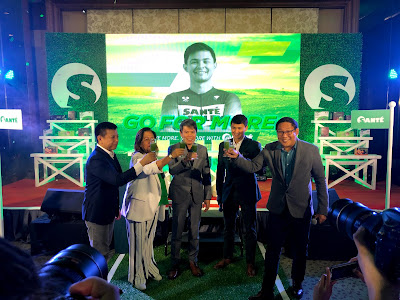 Pasig City, Philippines; February 26, 2020—Santé, a provider of premier organic health and wellness products and services, formally introduced celebrity fitspiration Matteo Guidicelli, as its newest ambassador, alongside TV host and weatherman Kuya Kim Atienza, recently at the Marco Polo Ortigas Manila in Pasig City.
According to Santé CEO Joey Marcelo, 2020 will be an exciting year for the brand, especially with the addition of Guidicelli to its roster of brand ambassadors.
"Aside from being an actor, singer, and a triathlete, Matteo embodies healthy living. As a company, this is what we, at Santé, are passionate about. We are glad and excited to welcome Matteo to the Santé family and, we hope that he will serve as a true fitspiration for everyone," Marcelo added.
As an actor, model, member of the armed forces, businessman, and triathlete, he knows how important it is for him to stay healthy so he could live more and do more things in life. And because there are so many exciting developments to his career and personal life this year, the need to stay healthy so he could enjoy the journey has become even more important to him. Matteo Guidicelli also expressed his excitement, especially that he has known Santé as a brand that promotes a healthier and more active lifestyle.
“Ever since I started joining triathlons, I have seen and raced along with the Santé Barley TriTeam, Kuya Kim, and Sir Joey. I also have always dreamed of being part of the Santé family,” added Matteo. “Santé, as a brand, also just talks about the importance of living a healthy and active lifestyle. It is very positive. And so, I am excited and honored to represent the brand.”
Kuya Kim, on the other hand, is also ecstatic about Matteo, joining him as a Santé ambassador. “I, personally, know Matteo and his family. When he gets into something, he’s really into it. He lives a healthy lifestyle and is a good person. He’s a good son and a good husband-to-be and, he’s highly principled. I am so honored to be doing this endeavor with him,” he said.
Kuya Kim Atienza has been Sante's ambassador for ten years. He said that he started taking Santé Barley, the company’s flagship product, a few years ago, after learning about the health benefits of organic barley grass. Indeed, he credits Santé Barley as instrumental in how he has not only bounced back from ill-health, but more importantly, how he has maintained his health that has allowed him to stay healthy, be more active and live more. 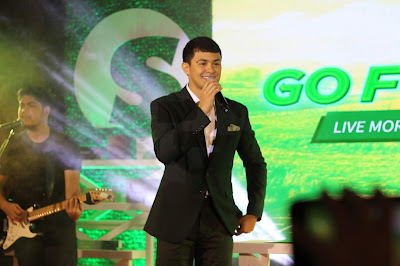 “There is a saying that health is wealth. It may sound cliché because people use it all the time but, I know that through experience because I almost died twice—when I had a stroke in 2010 and when I got sick again in 2013. After those two health scares, it was embedded in my mind, and my heart, that I should be healthy not just for myself but also for my family and my God,” added Kuya Kim.
Santé Barley is made from organic pure barley grass, an effective antioxidant, rich with vitamins and minerals that not only detoxifies the body but also aids in digestive health. This product is also certified by BioGro, New Zealand’s leading organic certification agency.
Aside from Santé Barley, the company also offers other products and services that improve the quality of life of people around the world since it was founded in 2007.
“The whole Santé family is glad to welcome Matteo Guidicelli, as well as to celebrate the renewal of our partnership with Kuya Kim Atienza, who has been with us for ten years. We look forward to a stronger year as we continue encouraging everyone to live more and do more,” Marcelo added.
To know more about Santé, its product offerings, and other upcoming events, visit their official FB Page at www.facebook.com/pg/santeofficial.ph or their website at www.santebarley.com/ph.
Posted by Boy Raket at 9:30 PM No comments: 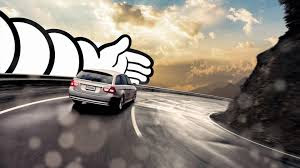 Michelin Philippines reiterated its commitment to road safety alongside its counterparts in Cambodia, Indonesia, Korea, Malaysia, Thailand and Vietnam at the Global Ministerial Conference on Road Safety held in Stockholm from February 19-20.
The conference was organized by Youths For Road Safety (YOURS) and the World Health Organization (WHO). Young delegates shared their successes and lessons learned from actions undertaken in the framework of the 2011-2020 Global Plan for the Decade of Action for Road Safety. It was an opportunity to link safe mobility with other sustainably-related challenges.
In Stockholm, Michelin invited three young employees from India, Thailand and Brazil to attend the Second World Youth Assembly as representatives of the private sector and participate in road safety-related decision-making. Their role was to share their experiences and raise awareness among Michelin teams in their respective regions about the best safer mobility solutions.
Findings showed that the 15-29 age group is the demographic most impacted by road accidents. Thus in 2010, Michelin collaborated with WHO to create YOURS, an NGO focusing on young people that encourages them to address road safety issues in both developed and developing countries. YOURS has set an ambitious road safety target to halve road deaths and injuries globally in five years, with young people leading the charge and providing energy to the revolution. As Founding Member of YOURS, Michelin and YOURS have a long-term partnership and are working together to improve road safety for young people worldwide.
Florent Menegaux, Michelin CEO, said safety is at the heart of “everything we do”. “It is a top priority every day across all our sites. For our customers, Michelin is synonymous with safety, reliability, performance and durability. And for 130 years, we have worked tirelessly to uphold this reputation. We believe it is our responsibility to make mobility safer across the world.”
In the Philippines, Michelin does its part for road safety by raising awareness on the importance of correct tire pressure, proper maintenance and fuel efficiency through its “Michelin Safe On The Road (MSOR) campaign. Michelin Philippines has partnered with S&R membership shopping club to render service to motorists by giving them free tire check-ups and information on how to maximize tire usage. The importance of awareness in reducing the risk of road accidents to ensure a safer and more liveable community for all is emphasized to motorists in MSOR.
About the Michelin Group:
Michelin, the leading mobility company, is dedicated to enhancing its clients’ mobility, sustainably; designing and distributing the most suitable tires, services and solutions for its clients’ needs; providing digital services, maps and guides to help enrich trips and travels and make them unique experiences; and developing high-technology materials that serve a variety of industries. Headquartered in Clermont-Ferrand, France, Michelin is present in 170 countries, has more than 127,000 employees and operates 69 tire production facilities which together produced around 200 million tires in 2019. (www.michelin.com)
Posted by Boy Raket at 4:00 PM No comments: 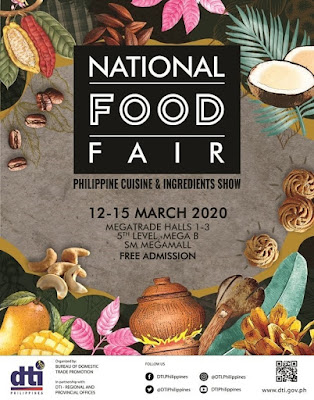 The DTI Bureau of Domestic Trade Promotion (BDTP) in partnership with the DTI Regional and Provincial Offices will conduct the 2020 National Food Fair on March 12-15 at SM Megatrade Halls 1-3, 5th level, Building B, SM Megamall, Mandaluyong City. Fair hours are from 10:00 AM to 9:00 PM daily. Admission is free.
Billed as the Philippine Cuisine and Ingredients Show, the four-day retail and order-taking event will showcase over 280 food entrepreneurs from the regions featuring processed food, beverages, halal products, cooking ingredients, health and wellness products, as well as the best cuisines across the country.
Special settings and pavilions include the Rural Agro-Industrial Partnership for Inclusive Development (RAPID) Growth focusing on cocoa, coffee, processed fruits and nuts, and coconut industries; fresh produce from the Integrated Natural Resources and Environmental Management Project (INREMP); and the Brunei Darussalam-Indonesia-Malaysia-Philippines East ASEAN Growth Area (BIMP-EAGA).
In addition to the KAPEtirya Coffee Pavilion, the Center for Culinary Arts (CCA) will showcase a halal kitchen in conjunction with the Halal Food Plaza, while the Philippine Island Bar will feature local wines. There will also be booths promoting farm tourism and culinary tour packages, as well as on-site cooking demonstrations by featured chefs in the Kusinang Filipino.
The Department of Trade and Industry is setting up a one-stop Negosyo Center to provide assistance with business requirements and start-up concerns for aspiring entrepreneurs. There will be representatives from various DTI bureaus and attached agencies such as the Bureau of Small and Medium Enterprise Development (BSMED), Bureau of Import Services (BIS), Export Management Bureau (EMB), One Town, One Product (OTOP), Philippine Trade Training Center (PTTC), Philippine International Trading Corporation (PITC), Design Center of the Philippines (DCP), and Intellectual Property Office of the Philippines (IPOPhil).
Other related government offices will also have a presence, including the Department of Tourism (DOT), the Industrial Technology Development Institute (ITDI) and the Food and Nutrition Research Institute (FNRI) of the Department of Science and Technology (DOST), the Food and Drug Administration (FDA) of the Department of Health (DOH), and the Philippine Coconut Authority (PCA) and the Agribusiness and Marketing Assistance Service (AMAS) under the Department of Agriculture (DA).
To support the sustainability initiative, fair-goers are strongly encouraged to bring their own reusable shopping bags. For more information, please contact DTI-BDTP at telephone numbers (02) 7751-3223 and (02) 7791- 3102, or email bdtp@dti.gov.ph. Follow DTI-BDTP on Facebook, Instagram, Twitter, and YouTube to get the latest news and updates.
Posted by Boy Raket at 11:30 AM No comments: