The Watch to Watch Out! 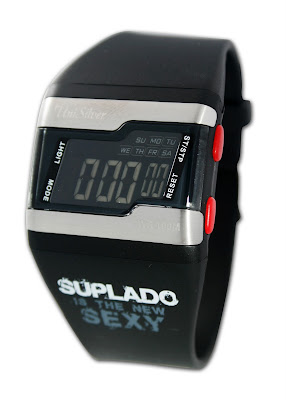 Suplado is the new sexy.This catchphrase is inscribed on the Suplado Watch, Stanley Chi’s exclusive timepiece from UniSilver Time. No, it’s not just some silly slogan. Or maybe it is – and therein lies its appeal.

Suplado Tips, Stanley Chi’s most recent book, has sold thousands of copies in less than three months. As the book continued to exceed expectations, corporate giant UniSilver Time knew better than to shrug it off as a mere fad. UniSilver Time came out with a watch that just might become as iconic as the book that inspired it: the Suplado Watch by Stanley Chi. The Suplado Watch is a digital timepiece available in black and white, with the tagline “Suplado is the new sexy” stamped on the strap.

To match the brazen humor of the timepiece, the ad poster shows local celebrity Iya Villania chasing after Stanley Chi, apparently made irresistible by his Suplado Watch.

The many retorts in Chi’s book, Suplado Tips, show off an unapologetic candor that is relatable yet funny, making suplado the new “it” thing. Being suplado (roughly translated as “standoffish”) has become an unorthodox trend in Philippine pop culture. It dares to stand on the edge of convention, a way to vent frustrations by walking away from what would have been a compromising situation, with one’s head still held high. 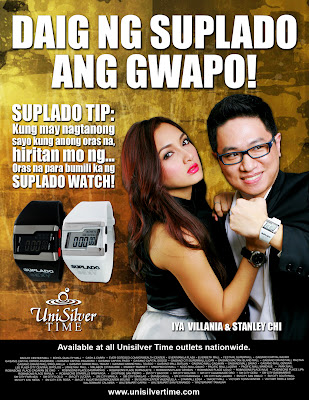 Because of the success of Suplado Tips, the country’s pop culture watch birds soon took notice. Spot.ph, a top online news provider in the Philippines, lauded Chi as an unconventional hottie. To quote, “Stanley's hot factor recently jumped from being simply nerdy college-boy crush to sexy hard-to-get hottie when he started dishing out Suplado Tips that apparently drive Pinays wild.” FHM, one of the country’s leading men’s magazines, also featured and depicted a few of the suplado tips from Chi’s book. Undeniably newsworthy, Chi’s iconic book was then featured in Yahoo! Philippines.

Chi’s suplado campaign is arguably the most sellable concept to grace the Philippine market this year. People who want a copy of Chi’s book often find themselves empty-handed; despite being available at all National Bookstore outlets nationwide, Suplado Tips is usually sold out. And if everybody starts wearing the Suplado watch, it will come as no surprise.

As Chi says with pride, “Daig ng suplado ang gwapo(Suplado beats being handsome).” Owning a Suplado Watch is then a way for a suplado to show off without saying a word. Who knows? It may even have special powers to ward off bullies and other evil spirits. The Suplado Watch by Stanley Chi is now available at unisilvertime.com and all UniSilver Time stores nationwide.

* This article was written by fellow bloger Stef dela Cruz
Posted by Boy Raket at 2:40 PM