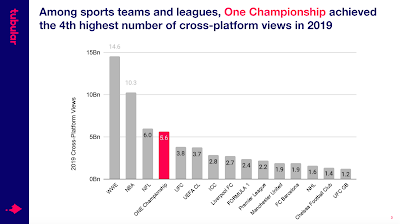 2019 was a fantastic year for professional wrestling and mixed martial arts, particularly in the realm of online video viewership.

Tubular Labs is a major authority in online video analytics, certified under the official YouTube Measurement Program. It provides comprehensive and actionable video intelligence by gathering data and information from online video platforms including YouTube, Instagram, and Facebook.

Singapore-based martial arts organization ONE Championship was fourth with 5.6 billion views, ahead of the Ultimate Fighting Championship (UFC) in fifth with 3.8 billion.

Martial arts and combat sports segments took up three of the top five spots – a remarkable statistic based on the immense popularity of team sports like basketball and football.

Over the past few years, the rise of online short-format video has seen a significant increase in daily media consumption, globally. This format is primed to better hold the attention span of potential viewers because it combines a lot of information with concise delivery.

Thousands of videos are uploaded every day across all platforms, and the most interesting ones go viral. According to Tubular Labs, there are more than 269,000 online creators who are each generating at least a million unique views every month. This is enough to post more than 6 billion videos, which Tubular Labs sifts through and measures.

The vast amount of media means the competition for viewership is fierce, and target audiences are fragmented and crowded. Every organization is competing for a slice of the pie, making this victory for martial arts even more impressive.

These combat sports properties boast a strong social media influence and have consistently delivered a stream of online video for mass media consumption.

A variety of content stacks are available around the clock, including full martial arts bouts, highlights, recaps, analyses, commentary, video blogs, and podcasts, as well as reality television and even esports.

ONE Championship is widely recognized as the world’s largest martial arts organization, but it has also delved into the world of competitive video gaming with ONE Esports. This relatively new subsidiary offers live tournament streaming, the latest esports news, game reviews, features, walkthrough guides, and in-depth stories on esports athletes and teams. Esports is the fastest-rising phenomenon in the sports and entertainment world, with revenues exceeding $1 billion and audiences of more than 443 million across the globe in 2019 according to data featured by Forbes.

In addition, ONE also has its own travel and talent-search series in the form of Rich Franklin’s ONE Warrior Series, which seeks to find rising young martial arts stars.

All of this combined contributes to ONE’s rapidly growing presence online, where it has built an entire ecosystem of fresh content across their various IPs.

Furthermore, ONE is slated to premiere The Apprentice: ONE Championship Edition in Q4 of 2020. The organization’s founder, Chairman, and CEO, Chatri Sityodtong – who is set to star in the show – describes this take on the hit reality television franchise as the “toughest version of The Apprentice yet.”

Despite the COVID-19 world that we currently live in, martial arts and pro wrestling entertainment properties seem to be in a great spot.

In a world ravaged by the COVID-19 pandemic, the majority of people are forced to stay indoors and mass gatherings that pose an imminent risk of spreading the contagion are largely prohibited. This has hit live sporting events, where thousands of fans gather in close proximity.

Many sports leagues were initially opposed to the cancellation of their live shows, and instead explored alternative options including holding audience-free, closed-door events. However, the worsening COVID-19 situation and intensified restrictions on travel over land, sea, and air have made hosting these events next to impossible.

Organizations like ONE Championship, however, have flourished, primarily due to their strong online presence.

Mixed martial arts is a sport that is well-positioned for success when live sporting events are able to resume, presumably when COVID-19 is under control. ONE, in particular, has enough digital video reach to offset its pause in live events, allowing the organization to remain in mainstream consciousness.

Expect viewership to continue to rise, especially during a time when the whole world is glued to their screens.