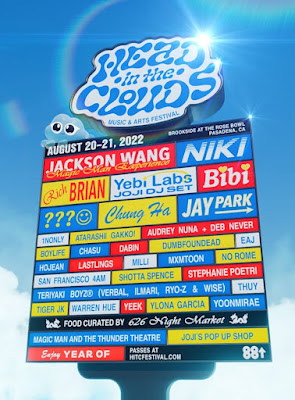 LOS ANGELES, CA: May 23rd, 2022: Today, 88rising, the pioneering and internationally-renowned music and media company amplifying Asian talent and culture, and Goldenvoice, the Los Angeles-based company behind concert events like Coachella and Stagecoach, are thrilled to announce the 2022 Head In The Clouds Music & Arts Festival lineup. Head In The Clouds will take place on Saturday, August 20 and Sunday, August 21, 2022 at Brookside at the Rose Bowl in Pasadena, CA. Presale begins Thursday, May 26th (purchase passes HERE). Passes will officially go back on-sale Friday, May 27th (purchase passes HERE).

New activations this year will include Magic Man and the Thunder Theatre, Joji’s Pop Up Shop and Enjoy YEAR OF. In addition, the iconic 626 Night Market has partnered with Head In The Clouds as the festival’s official food curator for the 4th year in a row. More  details to follow  on vendors and food & beverage activations to be announced.

88rising is the pioneering global music & media company representing the best of Asian talent. 88rising was the first company to launch an Asian-centric music festival in the United States (Head in the Clouds Music & Arts Festival - now in its fourth year), the first to have an Asian artist top the Billboard R&B/Hip-Hop charts and Spotify’s Weekly Global Albums chart, and the first to launch an all-Asian radio channel reaching all of North America. In 2021, 88rising executive produced and curated the soundtrack to Shang-Chi and the Legend of the Ten Rings - Marvel Studios’ first Asian-American superhero. In 2019, they were awarded Label of the Year by NetEase, one of the largest music streaming platforms in China. With over 160 million followers across global social media platforms and over 40 billion total streams and views, 88rising’s global influence is undeniable.

About the Rose Bowl Stadium

Connect with Head In The Clouds Festival: