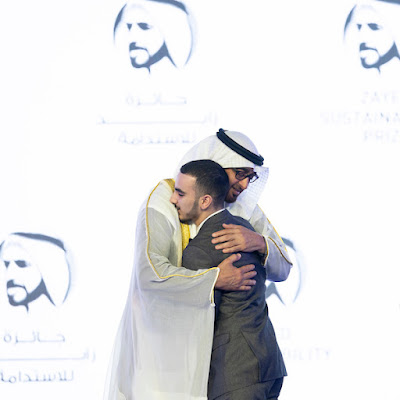 The US$3 million Prize is the UAE’s pioneering global award in sustainability that recognises and rewards small and medium-sized enterprises, nonprofit organisations and high schools around the world that are delivering impactful, innovative and inspiring solutions in health, food, energy and water.President His Highness Sheikh Mohamed bin Zayed, President of the UAE, presented the awards to the 10 winners across five categories, in the presence of various heads of state, ministers, and other senior-level dignitaries from the UAE and abroad, in addition to past winners, and the 2023 finalists.Attending the ceremony were H.H. Lt. General Sheikh Saif bin Zayed Al Nahyan, Deputy Prime Minister and Minister of the Interior; H.H. Sheikh Mansour bin Zayed Al Nahyan, Deputy Prime Minister and Minister of the Presidential Court; H.H. Sheikh Theyab bin Mohamed bin Zayed Al Nahyan, Member of Abu Dhabi Executive Council; H.H. Sheikh Hamdan bin Mohamed bin Zayed Al Nahyan; Sheikh Mohammed bin Hamad bin Tahnoun Al Nahyan, Advisor for Special Affairs at the Ministry of Presidential Court; Sheikh Nahyan bin Mubarak Al Nahyan, Minister of Tolerance and Coexistence; along with a number of Sheikhs and senior officials.In congratulating the winners, His Highness Sheikh Mohamed bin Zayed reasserted the Prize’s role as a global catalyst for sustainability and humanitarian action. He said: “The UAE continues to lead on important global initiatives at the heart of our mission to create a better future for all, both within the UAE and beyond our nation’s borders. The bold ambition of the Zayed Sustainability Prize remains at the forefront of these efforts. It creates a pathway for delivering life-changing humanitarian aid and solutions to communities around the world.”Sheikh Mohamed bin Zayed Al Nahyan underscored how this year, which marks 15 years of the Prize, will also be a historic year for the UAE as it prepares to host the 28th session of the Conference of Parties (COP 28) to the UNFCCC (United Nations Framework Convention on Climate Change). Against this backdrop, this year’s awards serve as an important reminder of the need for greater international collaboration to mobilise climate action and create sustainable economic and social development opportunities across all nations, including the global south.His Highness continued: “Over the last 15 years, the Zayed Sustainability Prize has successfully built upon the legacy of the UAE’s Founding Father, Sheikh Zayed, and carried forward his bold humanitarian vision, ensuring that the resources of our great nation are fully used to the benefit of all people. Today, the Zayed Sustainability Prize stands an internationally recognised award that mobilises innovators, social entrepreneurs and young people to accelerate positive change for our planet and all people.”Through its 96 former winners, the Prize has transformed the lives of more than 378 million people around the world since 2008, including in Vietnam, Nepal, Sudan, Ethiopia, Maldives and Tuvalu. In the Health, Food, Energy, and Water categories, each winner receives US$600,000, while the Global High Schools category has six winners, representing six world regions, with each winner receiving up to US$100,000.His Highness also emphasised the need to develop bright young people into the critical thinkers and sustainability leaders of tomorrow, and praised the Prize’s Global High Schools category, which empowers youth to play an active role in supporting their communities’ socio-economic development. 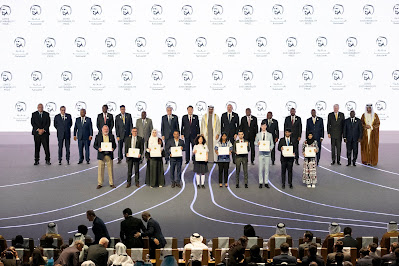