Nurturing the Gift of Worth Lodriga 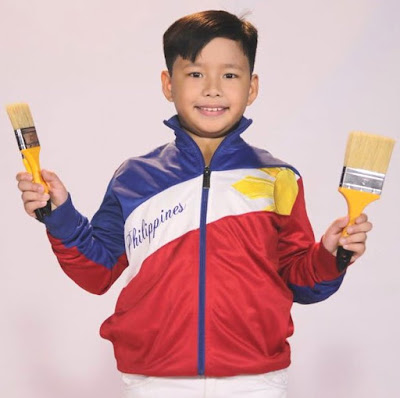 When people talk about kids’ art, they often picture basic drawings composed of shapes and curves, with colors outside the lines. But from the beginning, young artist Worth Lodriga's work has been anything but basic.

When he was two years old, Worth’s motor skills were way advanced for his age that his art could be mistaken for a 5-year old’s. His mother noticed this innate gift when she was teaching him to read and write. She took a quick break and left him to play on his own, and when she returned, she saw her son doodling on the whiteboard. “I was amazed because I hadn’t seen a 2-year old boy who could draw a human being in 3D,” she said. That was the moment she thought of enrolling Worth in Promil Four’s i-Shine Talent Camp.
Worth joined Promil Four’s i-Shine Talent Camp 4, formerly known as Promil Pre-School’s i-Shine Talent Camp, when he was just four years old. There he explored drawing details, painting, and other crafty activities. “I enjoyed the experience a lot because I learned how to widen my imagination and make better art,” he said.

This exposure helped pave the way for his professional career as an artist. After joining the talent camp, Worth participated in and won several international competitions, including the Frogs Are Green International Art Contest 2016 in New Jersey, where he was pitted against 1,441 entries globally; the 2017 Airtime Watertime International Flotation Suit Design Contest in Santa Barbara, California; the 7-Star Artist Award at the Junior Picasso International Art Contest in India; and the 2017 Student Mars Art (SMArt) Contest in Colorado, U.S.A., where his piece “Where No Man Has Gone Before” won first place.

His latest recognition was the 10th Ani ng Dangal Awards for the Visual Arts category in 2018 where he was honored for garnering international awards from the previous year.

Ani ng Dangal was launched in 2009 to give honor and recognition to artists whose works and achievements have placed the Philippines among the best in the world.

Worth is a shining example of how parents play an important role in nurturing their kids' talents and making sure they are exposed to learning experiences that will hone and nurture these gifts. As such, Worth is further helping moms and dads nurture their children's gifts as he appears in the newest Promil Four TVC.

Just like Worth, parents can nurture the gift by allowing their children to explore their talents, and shine bright through experiences that will help further develop their skills. To know more about Promil Four’s i-Shine Talent Camp 7, visit www.promilnurturethegift.com.ph for more details.
Posted by Boy Raket at 3:00 PM