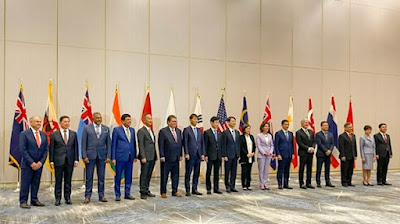 LOS ANGELES, United States – The Philippines highlighted more investment opportunities in processing facilities for green metals such as nickel, cobalt, and copper, as well as funding for other non-fossil-based energy sources during the Indo-Pacific Economic Framework for Prosperity (IPEF) held on 2 September 2022.

In a conference call with United States Commerce Secretary Gina Raimondo ahead of the ministerial meeting, Department of Trade and Industry (DTI) Secretary Alfredo Pascual also pitched investments that would increase the country’s participation in value chains of high-value critical products. The trade chief likewise thanked Secretary Raimondo for facilitating recent US Trade and Development Agency (TDA) grants, which he noted can be replicated and expanded through the IPEF.In addition, during a recent visit last 06 August, US Secretary of State Antony Blinken announced a grant for a feasibility study on the Philippines’ first off-shore wind farm and cited this as indicative of US’ vision for the IPEF.Another grant that will soon be announced involves the processing of nickel ore through a partnership with an American company that owns patents in the manufacture of batteries. The US firm supplies US military and critical industries including hyperscaler data centers, renewable energy projects, and long-haul trucking companies.Secretary Pascual welcomed Secretary Raimondo’s IPEF Upskilling Initiative in which 14 of the largest US digital companies such as Apple, American Towers, and Amazon will provide digital skills training to seven million women and girls in less-developed IPEF parties including the Philippines.The Philippines also expressed interest in mechanisms that lessen information asymmetries by promoting commercially oriented knowledge-sharing platforms aimed at developing MSME-inclined ecosystems through the utilization of carbon credit market and green financing instruments. The country likewise supports “green lanes” and other investment facilitation vehicles for existing and future grants dedicated to establishing cross-border private joint venture partnerships in the region.“I laud Secretary Raimondo and [US Trade Representative] Ambassador Katherine Tai’s effective and innovative design of the Los Angeles IPEF Ministerial Meeting. The program allowed parties to have a meaningful exchange of ideas toward delivering an IPEF that will not only be a framework for defining regional trade and investment relations, but equally important, will be an effective platform for undertaking innovative modes of regional industrial collaboration, "Secretary Pascual said.At the meeting, the ministers resolved to establish a “Benefits Workstream” in each of the IPEF Pillars of Trade, Supply Chains, Clean Economy, and Fair Economy. They provided broad guidance on the negotiating objectives of partner countries in achieving an inclusive and high-standard economic regional framework. In recognizing different levels of development and individual economic capabilities, IPEF is committed to ensuring mutually beneficial outcomes and boosting trade and investment opportunities for peoples and markets within the region. Thus, partner countries:During the ministerial meeting, the Philippines referred to discussions during the conference call and raised the absence of a market access component at this time. Given that legislations and policy measures restrict market access, the US can consider IPEF as an avenue to provide preferential treatment or equitable access to trade for partner countries.Such assistance may be in the form of grants, subsidies, or procurement opportunities that support or complement industry development initiatives of developing partner countries in the IPEF. By pursuing and utilizing mechanisms such as these, partners are further incentivized toward working collectively to build and sustain robust investment environments that contribute to increased economic opportunities and competitiveness in the Indo-Pacific.Apart from India and the US, IPEF partners include Australia, Brunei, Fiji, Indonesia, Japan, Korea, Malaysia, New Zealand, the Philippines, Singapore, Thailand, and Vietnam.Together with other IPEF partners, the Philippines endorsed the ministerial statements on Trade, Supply Chains, Clean Economy, and Fair Economy upon conclusion of the first official in-person Ministerial Meeting on 09 September 2022.Trade Secretary Pascual likewise thanked the other agencies who joined the DTI-led Philippine Delegation, which includes the Department of Foreign Affairs (DFA) as co-Head of Delegation and the involvement of the Departments of Energy (DOE), Finance (DOF), and Justice (DOJ).
Posted by Boy Raket at 2:30 PM