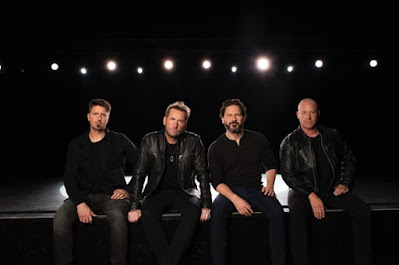 The single, “San Quentin'' was inspired after front man Chad Kroeger met a real-life warden from the notoriously high security California prison. The song follows as he plots his clever escape. Stream HERE. Watch the new lyric video HERE. In addition to “San Quentin,” the band’s forthcoming project will feature 10 new songs all penned by Nickelback.

“We’ve spent the last few years making a record at a pace that gave us the freedom to create and we can’t wait for everyone to hear the new music,” says Nickelback. “We’ve missed the fans and look forward to bringing the new songs to life on stage, so let’s Get Rollin’!”

The band’s 10th studio record Get Rollin’ and Get Rollin’ (Deluxe) will be available via digital platforms and physical CD purchase. The deluxe edition will include four bonus tracks - acoustic versions of “High Time,” “Just One More,” “Does Heaven Even Know You’re Missing?” and “Horizon.” Standard and exclusive versions of the album will also be released on vinyl in 2023. Pre-save/Pre-order HERE.

With Get Rollin’, Nickelback will continue their legacy as one of the most important rock acts of the last two decades.

Named the “most successful rock back of the decade” by Billboard in 2009, Nickelback is one of the most commercially viable and important acts of the past two decades. The four-piece, which is comprised of Chad Kroeger, Mike Kroeger, Ryan Peake and Daniel Adair, is globally celebrated for their career defining and award-winning hits including “How You Remind Me,” “Photograph,” “Far Away” and “Rockstar” which all held top spots on the Billboard 100. Their success includes worldwide sales of more than 50-million units, solidifying their status as one of the top-selling acts of all time and the second best-selling foreign act in the U.S., in the 2000’s decade, behind only The Beatles. Their inescapable and irresistible smash “How You Remind Me” was named Billboard’s ‘Top Rock Song of the Decade’. It was the number-one most played song on U.S. radio (any format) in the 2000’s decade according to Nielsen Soundscan, with over 1.2 million spins.