Maroons Far From Home: How Converge #DobleNa Erases the Distance for Homesick Hoopers 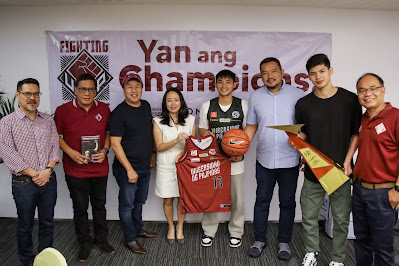 In the life of every UP student-athlete, there is much sacrifice involved — from grueling training to time management — in order to achieve their dreams in both sports and academics.

For those who hail from the provinces and overseas, there is also the added layer of being away from their family and loved ones for most of the calendar year.With their focus zeroed in on their careers and finishing their degrees, it is easy for precious time with those who are important to get lost in the thick of things.But luckily for members of the UP Men's Basketball Team, Converge ICT Solutions Inc. dishes an assist in the form of high speed internet in their dorm to help the players communicate with their loved ones from miles away.Fil-Canadian Antonio Eusebio and Fil-Am Henry Galinato Jr. had to adjust the most as they joined the helm of the Maroons, as they needed to get used to life in another country.Though admitting it's a challenge to live independently, they are able to adjust with the help of Converge and technology."At first it was a struggle, but like this time, I think I've experienced all the things that I've needed to experience and it's much better. I'm having an easier time," said Eusebio, who says his mother gets upset when he misses a video call. "They're all very clingy.""It's hard but I got pretty used to it because Zav [Lucero] helped when I was here. But, you know, I miss my mom and everybody over there. I'm a lot older so it's not as hard as if this was a few years ago, it probably would be much more of a struggle for me but it's not that bad [with technology]. It's not like I'm going away forever, it's how I see it," quipped Galinato.UP newcomer Janjan Felicilda also noted the flexibility Converge's internet provides, as the threat of COVID-19 continues to loom and limits in-person visits with family members."Syempre malaking bagay sa amin yun kaya nagpapasalamat kami sa Converge na napadali yung pag-communicate namin sa mga magulang namin, sa mga mahal namin sa buhay lalo na syempre, may COVID parin so pinadali nila yung buhay namin," he said.Reyland Torres, for his part, noted that because of the distance, he would only get to see his family for twice a year. Being able to communicate via the internet helps douse the homesickness."Yung family ko halos twice a year lang kami magkasama kaya sobrang nagpapasalamat ako sa internet na binigay sa amin, makapag-usap kami ng family ko kahit malayo sila sa amin and araw-araw minemake sure namin makausap sila, kung okay lang sila. Okay lang din ba kami dito," Torres said.Felicilda hails from Butuan, while Torres is from Bacolod.Being able to communicate with family with constancy is of the utmost importance for the Fighting Maroons, as a number of them say that their family is the source of their biggest motivation."Important role yung parents ko sa pangarap ko kasi sila nagbibigay sa akin ng motivation, simula pa nung bata ako, sila na yung palaging nagsusupporta sa akin. Sila yung laging nasa likod ko pag gusto ko abutin yung pangarap ko," quipped Harold Alarcon, who is also from Bacolod."Sobrang laking bagay nila kasi sila yung nagpupush sa amin araw araw para mabuhay, para maglaro tapos may kukuhanan ka ng lakas para magpursigi sa buhay," added Davao-born Cyril Gonzales.Even without seeing their family personally for most of their lives as student-athletes, UP folk hero JD Cagulangan, who comes from Butuan City, says that their love is felt from miles away through Converge."Yung support laging nandyan, yung mga kuya ko, even yung mga relatives ko, nararamdaman yung support nila sa akin," Cagulangan said.Converge's latest offering gives consumers double their money's worth with fast internet as the FiberX Plan 1500 now gives users up to 100Mbps from its previous 50Mbps.Like the Fighting Maroons, continue to fight the distance with fast and reliable internet.The reigning UAAP champions tested their mettle in South Korea for their preseason preparations. As part of their training, they have been facing pro teams in tune-up games.“Sa amin, sobrang laking tulong [nung games dito sa Korea] kasi yung mga kalaban namin, mga pro na. Malaking bagay talaga,” said Cagulangan.
Posted by Boy Raket at 1:00 PM