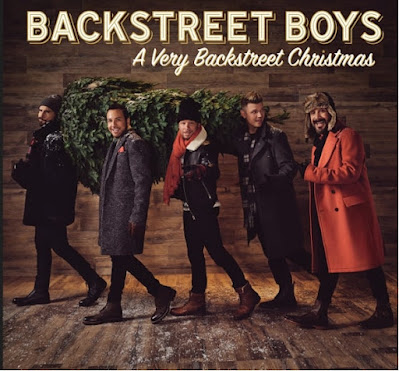 ‘A Very Backstreet Christmas’ features numerous timeless holiday classics including “White Christmas”, “Silent Night”, “Have Yourself A Merry Little Christmas” and “Last Christmas,” which the boys released last month giving fans an early taste of what Christmas with the Backstreet Boys will look like this year. And on November 1st, they will release the official video for “Last Christmas.” The album also features three all new original holiday songs “Christmas In New York,” “Together,” and “Happy Days.” See below for the full tracklisting. Exclusive formats include a 15-track CD at Target which includes two bonus tracks “Feliz Navidad” and “It’s Christmas Time Again” and limited edition red-vinyl on the group’s official store.Backstreet Boys will continue to spread holiday cheer this year with more exciting gifts and surprises for fans in the coming weeks. In December, they will perform at five iHeart Radio Jingle Balls in major cities such as Detroit, New York City, Boston, Tampa and Miami.Stay tuned for more Christmas surprises from Backstreet Boys soon!The release of the Christmas album comes as the Backstreet Boys recently kicked off the European leg of their DNA World Tour following the end of their North American Leg. The band has been putting on electrifying performances, playing a high-energy set of over 30 of their greatest hits and best dance moves, giving fans the live experience of a lifetime. See below for tour dates.
ABOUT BACKSTREET BOYSFor 29 years the Backstreet Boys have delivered the finest pop music one has to offer, making them one of pop’s most influential performers. With countless #1s, record-setting tours, numerous awards and worldwide sales in excess of 130 million, BSB has been recognized as the best-selling boy band in history.In early 2019, BSB released their GRAMMY nominated 10th studio album “DNA” on RCA Records. The album debuted at #1 and features the Top 10 hit “Don’t Go Breaking My Heart.” The critically acclaimed and chart topping single was nominated for the “Pop Duo / Group Performance” 2019 GRAMMY, and was BSB’s first hit on the Billboard Hot 100 in 10 years. Upon its release, the single went straight to #1 on iTunes Top Songs and Global charts and charted in over 22 countries.In May 2019 the Backstreet Boys kicked off “The DNA World Tour” - the group’s biggest arena tour in 18 years thanks to the global success of their #1 new album. The DNA World Tour has seen the group sell out arenas all over North America, Europe, Asia and South America.Over the years, the Backstreet Boys have continually captivated millions of people with their impressive catalog of hit songs and creative partnerships.
Posted by Boy Raket at 8:00 AM