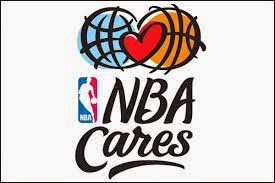 - Thunder Girls and Hugo the Hornet to Join Festivities -

NBA Cafe Manila will host two NBA Playoffs viewing parties for Filipino fans, showcasing the Western Conference Finals between the Golden State Warriors and the Houston Rockets.  Clarkson and Burke will attend viewing parties for Games 2 and 3 on May 22 and 24 (Philippines time), with Grant joining for Game 3.  Clarkson, Burke and Grant will also conduct an NBA Cares basketball clinic for 60 underprivileged local youth from Project Pearls – a nonprofit organization whose mission is to help underprivileged children lead a better life through education – and make an appearance at the NBA Store on May 23.

Trey Burke was drafted ninth overall in the 2013 NBA Draft and was named to the 2013-14 NBA All-Rookie First Team.  Burke averaged 12.8 points, 4.3 assists, 2.7 rebounds and 0.9 steals per game in his sophomore season and was selected to participate in the BBVA Compass Rising Stars Challenge at NBA All-Star 2015 in New York City.

“As a proud Fil-Am, I am really looking forward to my upcoming visit to the Philippines.  The Pinoy fans have been very supportive of me all year long, and I can’t wait to thank them in person.”

Trey Burke of the Utah Jazz

“The NBA Playoffs have been tremendous so far, and I can’t wait to watch the Conference Finals with arguably the most passionate basketball fans in the world.”

Horace Grant, NBA Legend and four-time NBA Champion “I have been eager to return to the Philippines since my first visit in 2011.  I still remember the fans’ passion and deep knowledge of basketball and the NBA.  There is no better way to celebrate the game than to share the excitement of the NBA Playoffs with these Filipino fans.”