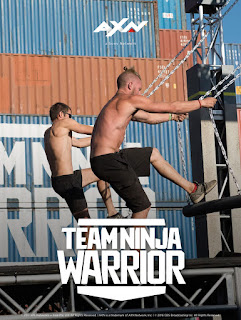 The competition gets tougher in the world’s most intense obstacle course in the epic reality show Team Ninja Warrior, as it returns for a second season this August on AXN.
The upcoming season once again features some of the biggest names from the American Ninja Warrior franchise as they battle it out in the dual running course with even more challenging obstacles, incorporating speed, human agility, skill, and a whole new strategy of racing.
Competitors form the toughest 28 teams yet, each with two males and one female, race side-by-side against each other on the world’s most challenging and physically demanding obstacle course to earn the ultimate ninja bragging rights and to be crowned Team Ninja Warrior champions.
Comedian Matt Iseman and former NFL player Akbar Gbajabiamila return as hosts for Season 2, with sportscaster Alex Curry as the sideline reporter.

*This is Press Release
Posted by Boy Raket at 8:11 PM