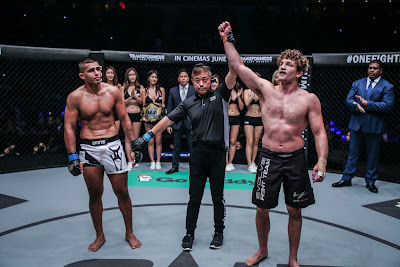 Even though there are many combat practices in mixed martial arts, undefeated ONE Welterweight World Champion Ben “Funky” Askren stands firm on the notion that wrestling is the most vital discipline in the sport.
In the constantly-evolving arena of martial arts, many competitors and coaches are still striving to discover what training formula results in consistent success.
Wrestling has been often regarded as the best foundation in the sport as numerous wrestlers transitioned easily into the sport, including Randy Couture, Dan Henderson, Daniel Cormier, Brock Lesnar, Chuck Liddell and Frankie Edgar.
Throughout the course of mixed martial arts history, wrestlers have shared the cage with other practitioners on numerous occasions.
In the current state of the sport, wrestling has become a necessary requirement for combatants to extensively learn.
“If you’re going to ask a lot of the mixed martial artists, they’re going to say that wrestling is the number one martial art to learn,” Askren said.
Askren is highly regarded for his outstanding wrestling background that earned him two NCAA Division I national championship trophies and the privilege to represent the United States at the 2008 Beijing Olympics.
While many children were motivated to first pick up a basketball because of Michael Jordan or kick a soccer ball because of David Beckham, Askren was a little different.
Growing up in the Midwestern United States, a region traditionally known as a hotbed for amateur wrestling, Askren was motivated by the spirit of competition and wanted to participate in a sport where he could be the master of his own fate.
“What really attracted me to wrestling was it was a one-on-one sport, and you make or break your destiny. I did not like to let other people control my destiny. I wanted to be in control of my own destiny. I wanted it to be my fault if I won, or my fault if I lost, so I guess I had a hard time with other people having control over my outcomes,” he shared.
Askren had long planned switch to mixed martial arts and conquer that sport once he hung up his wrestling boots.
Following his 2008 Olympic campaign, Askren made the transition and has flawlessly translated his impeccable grappling skills into his growing skillset.
The 33-year-old American has been perfect in competition, amassing an immaculate professional record of 16-0 with 1 no contest en route to becoming the ONE Welterweight World Champion.
“Being a champion is more than wearing a gold belt around your waist,. It is a lot about how you live, and a lot about how you affect others around you by the way you live and train,” Askren explained.
Askren plans to show everyone just how good he is once again on Saturday, 2 September when he defends his ONE Welterweight World Championship against Swedish contender Zebaztian “The Bandit” Kadestam in the main event of ONE CHAMPIONSHIP: SHANGHAI, which takes place at the 15,000-capacity Shanghai Oriental Sports Center in Shanghai, China.
A tall order is in front of Askren as unlike the Olympian’s previous opponents, Kadestam is armed with a dangerous striking game as he possesses a top-shelf Muay Thai skillset with knockout power. 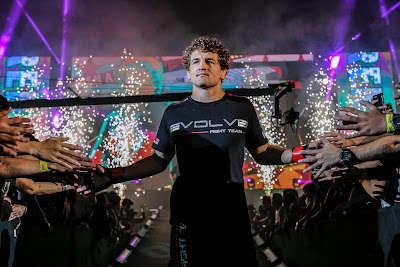 Kadestam made headlines last May when he defeated Santos as the little-known Swede had been completely dominated in the opening two rounds of the contest before pulling off a miraculous knockout in the final stanza.
Askren admitted that Kadestam’s shocking conquest of Santos nearly five months ago caught his attention.
“He is tough and he is durable, and that showed in the match with Santos. He took some hard shots, but stayed in there and kept competing,” he said of the Swedish standout.
Although he stakes his undefeated record and the coveted ONE Welterweight World Championship title against a dangerous foe like Kadestam, Askren believes there is nothing his opponent can do that will prepare him for what is about to come.
"It does not matter what my opponent's strengths and weaknesses are because at the end of the day, I have got the trump card. He cannot stop my wrestling, then he is going to be on his back, and he is going to get beaten up,” he declared.
“I will come across the cage, I will grab you, I will put you on your back, and I will punch you until you ask the referee to stop me from doing so. The other option is that I am going to make you tap,” Askren added.
For the past eight years, dating back to his professional debut in February 2009, his unstoppable strategy has worked brilliantly for Askren, who does not see any reason to stray from his strength.
“I am really effective at what I do. I never made a secret of it, and I always played to my strengths, and that is something a lot of people get away from. They do not play to their strengths, and I always play to my strengths, and I have been very focused and determined on what I do. So far, it has worked out well,” he stressed.
With his superb wrestling pedigree, Askren plans to exhibit another masterful performance as he shares the ONE Championship cage with a ferocious striker like Kadestam.
“Although Zebaztian Kadestam might be an underdog, I am not taking this match lightly. I know the feeling. I’ve been in that situation. Nobody should write off an underdog. But this is what I can assure. Wrestling has always been my bread-and-butter. Once I get you on the mat, it’s a matter of seconds before I finish you,” he guaranteed.
​For more updates on ONE Championship, please visit www.onefc.com, follow us on Twitter and Instagram @ONEChampionship, and like us on Facebook at https://www.facebook.com/ONEChampionship.
About ONE Championship™
ONE Championship is the largest sports media property in Asian history. Headquartered in Singapore, ONE Championship is the home of martial arts. The world’s most exciting martial arts organization hosts the largest sports entertainment events across Asia, featuring some of the world's best martial artists and world champions, all signed to exclusive contracts, on the largest media broadcast in Asia. In addition to its digital platforms, ONE Championship broadcasts to over 1 billion potential viewers across 128+ countries around the world with some of the largest global broadcasters, including FOX Sports, Setanta, MNC, Astro, Thairath TV, ABS-CBN, TV5, MYTV, HTV, OSN and more.