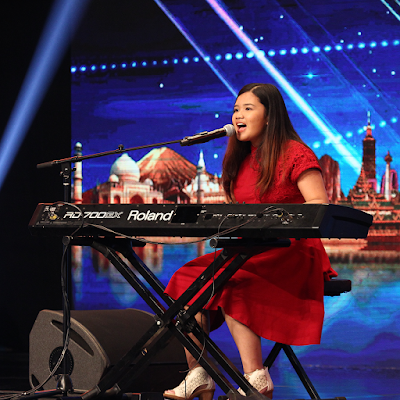 Fourteen year-old Fitri Cerado is not giving up on her dreams of being a singer. After missing out on the Asia’s Got Talent semi-finals in season one, Fitri is back after two years of hard work and training.

“The reason I came back to Asia’s Got Talent is because I want to prove David [Foster] wrong. I want to prove that I could work harder on my piano. I don’t want to give up on anything, I just need to work harder,” Fitri said with determination.
“Did I crush your dream?” David Foster asked.
“No, because I’m here now,” Fitri confidently replied before performing a mesmerizing rendition of The Animals’ “The House of the Rising Sun.”

“You just set a new standard. You just raised the bar for all the singers from now on. That was amazing, thank you,” Jay Park said. Fitri received three yeses from the judges and she’s now in the running to be in the semi-finals.
To watch these performances, extended highlights and exclusive behind-the-scenes clips, subscribe to the Asia’s Got Talent Official YouTube Channel at www.YouTube.com/AsiasGotTalent. For a full recap of this episode, visit www.AXN-Asia.com/AGT2recap.

“You made me laugh! And not only did you make me laugh, you gave away some magic tricks. I don’t know where this act is going, but I think I need you,” Anggun said. Akira will head directly to the semi-finals where he will be one step closer to winning the grand prize of USD100,000.
Asia’s Got Talent is the 67th adaptation of the Guinness-World-Record-breaking hit “Got Talent” format, which was created by Simon Cowell’s Syco Entertainment and is co-produced by FremantleMedia. The “Got Talent” format is officially the most successful reality TV format in history and currently airs in 186 countries.
Episode 2 encores this Saturday at 2:10pm on AXN. A new episode of Asia’s Got Talent airs every Thursday at 8:30pm. To follow the journey of this season’s acts, check out #AXNAsia and #AsiasGotTalent on Facebook, Twitter and Instagram.
Marina Bay Sands, Asia’s leading business, leisure and entertainment destination, is the official venue partner of Asia’s Got Talent.
Asia’s Got Talent is supported by presenting sponsor Traveloka, the leading travel booking app for all flight and hotel needs; and sponsoring partner Great Eastern Life, the market leader in the conventional life insurance business and the largest life insurer in Malaysia by asset size. In the Philippines, Asia’s Got Talent is brought to you by Cherifer, Tangkad Sagad, KFC Delivery and Vivo Smart Phone.
@AsiasGotTalent / #AXNAsia / #AsiasGotTalent / #AsiasGotTalentAuditions www.AXN-Asia.com/AsiasGotTalent
AXN is available on Cablelink Channel 38, Cignal Channel 121, Destiny Cable Channel 61, Dream Satellite TV Channel 20, G Sat Channel 51, and SKYCable Channel 49. AXN HD is available on SKYCable Channel 247.