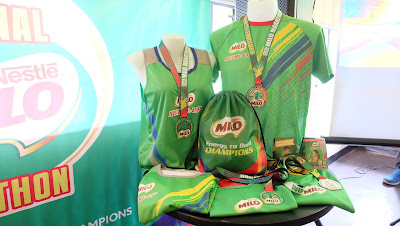 Since 1974, the National MILO® Marathon has energized champions and continues to inspire millions more in what is now known as the biggest, grandest and most prestigious running event in the country. Winners, crowned MILO® Marathon King and Queen, are granted the privilege to represent the country in top international marathon events. Participants from all walks of life are able to help inspire underprivileged children to reach for their dreams through the HELP GIVE SHOES advocacy. Decade after decade, the National MILO® Marathon will always help the Filipino people in building a nation of champions.

1. The 42nd National MILO® Marathon is organized by RUNRIO, INC. with local partners in all regional qualifying races nationwide.
2. Interested participants are required to pay a non-refundable entry fee alongside the accomplished and signed official registration form.
*P10 from the registration fee will be donated to the “HELP GIVE SHOES” advocacy.
NOTE: REGISTRATION IS ON A FIRST-COME FIRST-SERVED BASIS. PARTICIPANTS SHOULD WEAR THEIR MILO® MARATHON MARATHON SINGLETS & RACE NUMBERS DURING THE RACE OR THEY WILL NOT BE ALLOWED TO RUN.
3. Participants must be 18 years and above, born in the year 2000, to participate in the Full Marathon (42.195-K) and Half Marathon (21-K). Each runner will have to secure an official ‘Fit-To-Run’ medical certificate signed by a licensed physician within 2 months before race day. Participants who are found to have tampered their medical certificates will automatically waive their insurance coverages.
They are also required to present and submit a photocopied government ID upon registration. No participants will be allowed to register on their behalf.
4. Participants must be 16 years and above, born in the year 2002, to participate in the 10-K race.
5. Participants must be 7 years and above on the race day to participate in the 3-K & 5-K Fun Run.
For the 3-K category, there will be a kiddie run competition exclusive for participants aged 7 to 12 years old, born within the years 2006 to 2011. They are required to submit a photocopy of their NSO birth certificate or current school ID.
For the 5-K category, the competition is open to everyone aged 7 years old and above.
6. 10-K, 5-K, & 3-K participants below the age of 18 must seek their parental/guardian consent and fill up the entry form where the parent/guardian is required to sign.
7. Schedule of races is as follows:
8. Only local participants (Filipinos and foreigners with working visa) can join and win in the 42.195-K and 21-K qualifying races. Overseas participants may join and compete in the 42.195-K and 21-K National Finals for as long as they fulfill the requirements (see item # 24).
9. Start time per category is as follows:
10. Participants may claim their official race packets (containing the race number with timing chip attached) via home delivery for online registration and at the registration center for in-store registration together with safety pins upon complete registration. The route map can be viewed at the official MILO® website Race numbers are non-transferable. Registered runners who will ask another person to use their bibs on the race day will be disqualified from the race, will be held liable for any untoward event which transpires during the conduct of the race and will be banned from the event for a year.
11. The reverse side of the race number must be duly filled up. Participants must wear the assigned race number on his/her chest. Participants not wearing a race number will be taken off the course by the race marshals.
12. Pets, bicycles, motorcycles, vehicles and any other wheel-run objects are not allowed on the course other than the official race and medical vehicles.
13. Participants being paced during the race by a person who is not officially registered in the National MILO®Marathon and accepting assistance from non-race participants will be disqualified.
14. Participants who begin before the actual start time of his/her race category will be disqualified. Likewise, participants who do not start within 10 minutes from respective flag off will be disqualified and may not be allowed to start. No result will be given to disqualified participants.
15. “Gun Time” will be considered to determine the winners. Elite runners are advised to be ready in the starting line at least 15 minutes before gun time and are encouraged to stay at the front of the assembly area.
16. Participants must retire from the race immediately if asked or requested to do so by any member of the organizing committee. Race officials, marshals, medical staff, and security officers have the right to pull-out any participant deemed not physically fit to continue the race.
17. Participants in the 21-K provincial qualifying races will have two ways to qualify and compete in the 42.195-K National Finals:
a. Male finishing the race within 1:15:00 and female finishing the race within 1:35:00 will qualify and get an overnight accommodation and roundtrip tickets from any point in the Philippines to Tarlac for the National Finals this January 19, 2020. For qualifiers on races before November 5, it is their responsibility to contact the national race organizer on or before November 5, 2019 to coordinate their travel arrangements to Tarlac. For qualifiers on races happening November, it is their responsibility to contact the national race organizer on or before November 21, 2019. Those who will not compete in the National Finals forfeit all their privileges.b. Participants finishing the race within the specified age-bracket and time below will qualify. All expenses related to their participation will be shouldered by the qualifier.