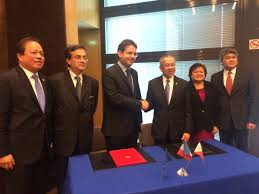 28 June 2019 – MANILA, The Philippines – The Philippines and France vowed to closely collaborate on sectors of mutual interest thru promotion/more frequent business visits, technical capacity building exchanges in emerging industries, and promote greater trade and investments given the strong complementation of the two countries.

Department of Trade and Industry (DTI) Secretary Ramon M. Lopez who together with French Secretary of State for Europe and Foreign Affairs Jean Baptiste Lemoyne, opened the 8th Philippines-France Joint Economic Commission (JEC) also exhorted business leaders from both sides to engage their counterparts more frequently by exchanging business missions and participating in each other’s startup events and key trade expositions such as the DTI-CITEM organized Manila FAME and the International Food Exhibition.

In his address, Secretary Lopez encouraged France to “closely look into the vast opportunities for growth in trade and investment between our countries.”

Secretary Lopez cited the significant increase in trade and investment figures posted by both countries in 2018, but challenged the French to further engage their counterparts from the various Philippine business sectors considering the strong macro-economic performance of the country, and the opportunities already being aggressively explored by other investors from Asia-Pacific, the Americas, Middle East and the rest of Europe.

During the JEC, the Philippines also conveyed its interest to pursue cooperation with France in the areas of renewable energy, e-commerce, collaborative research and development, shipbuilding and buoy-making, auto-electronics, IC design, and electronics design with space legacy, including accessing technical expertise from France.

Possible cooperation ventures between Philippine and French entities were also identified, including a Memorandum of Understanding between ASCIEL Alliance Electronique and the Semiconductor and Electronics Industries of the Philippines, Inc. Foundation (SEIPI). Updates were also provided in the implementation of previously-signed agreements in the maritime industry, aerospace, infrastructure and transportation including feasibility study projects on cable cars and an international food terminal.

The Joint Economic Commission meeting between the Philippines and France was co-chaired by DTI Undersecretary and BOI Managing Head Ceferino Rodolfo, and French Ministry of Economy and Finance Deputy Director for Bilateral Affairs Christophe Bories.