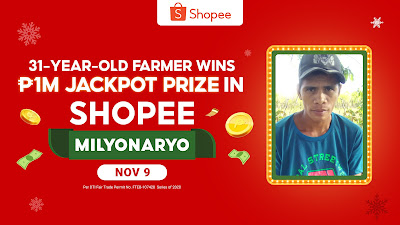 MANILA, November 10, 2020 - Reyman Bantad is a simple 31-year-old man from Negros Occidental. He lives with his partner of ten years and their eight-year-old child. Reyman wants the best things in life for his small family but lost his job as a sugarcane (tubo) farmer two years ago. He has been unemployed ever since.The Bantad family survives on Reyman’s partner’s meager earnings as a hacienda worker planting tubo. But work opportunities don’t come by often, and money is tight.Reyman and his partner do what they can to keep their child from going hungry, even borrowing money so they can buy rice. Though he occasionally asks for help from his siblings, they can’t always help out since they also have mouths to feed.He copes with these struggles by tuning in to Wowowin every day so he could live vicariously through the winners on the show. He dreams of winning himself and securing a better future for his family.Those dreams became a reality when he won P1M in Shopee Milyonaryo last November 9.Reyman learned about Shopee Milyonaryo on Wowowin, and though he fantasized about the possibilities, the thought of winning had never seriously crossed his mind. When he learned that he had won the opportunity to be on the show, he invited his family to watch it with him.Reyman’s family was so overwhelmed when he won the P1M jackpot that one of his siblings even ended up fainting. “Nung nalaman namin na nanalo ako, lahat kami naiyak. Kasi kailangan na kailangan namin ‘yung pera,” he shared.As for his cash prize, Reyman has practical ideas in mind. He plans to invest the money by starting a business so that his family can finally enjoy a better future.He also plans to give part of his winnings to his loved ones, especially now that the holidays are approaching. “Kasi binigay ‘yan sakin, dapat mamigay rin ako,” he said.Want to be the next millionaire?Shopee Milyonaryo is an interactive lucky draw contest on GMA’s Wowowin, where users can win up to ₱1,000,000 in cash every weekday until November 11. Users can participate by logging on to the Shopee app and claiming the raffle code. Winners will be announced every weekday during Wowowin. During the show, the winners will pick one out of six boxes, one of which contains ₱1,000,000 in cash.For more information about Shopee Milyonaryo, visit https://shopee.ph/m/shopee-milyonaryo.Download the Shopee app for free via the App Store or Google Play.About ShopeeShopee is the leading e-commerce platform in Southeast Asia and Taiwan. It is a platform tailored for the region, providing customers with an easy, secure and fast online shopping experience through strong payment and logistical support. Shopee aims to continually enhance its platform and become the region’s e-commerce destination of choice.Shopee has a wide selection of product categories ranging from consumer electronics to home & living, health & beauty, baby & toys, fashion and fitness equipment.Shopee, a Sea company, was first launched in Singapore in 2015, and has since expanded its reach to Malaysia, Thailand, Taiwan, Indonesia, Vietnam and the Philippines. Sea is a leader in digital entertainment, e-commerce and digital financial services across Southeast Asia. Sea's mission is to better the lives of consumers and small businesses with technology, and is listed on the NYSE under the symbol SE.
Posted by Boy Raket at 1:00 PM