Xiaomi is the No.1 best-selling smartphone brand in the Philippines during the 11.11 online campaign on Lazada and Shopee 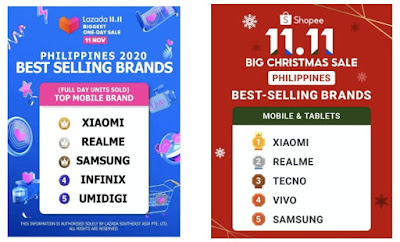 Xiaomi, global technology leader, ranked as the number one best-selling smartphone brand in the Philippines during the 11.11 online campaign on leading e-commerce platforms: Lazada and Shopee.The 11.11 campaign has set new records for Xiaomi smartphones. Besides being the no.1 best-selling smartphone brand, the recently launched Mi 10T Pro by Xiaomi has continued to gain its popularity and over 1,700 units were sold within 1 day while POCO X3 NFC smartphones were sold out within 10 minutes.Xiaomi aims to help power users’ creativity with the ultimate flagship smartphone Mi 10T Pro sporting a 108MP high-resolution camera, AdaptiveSync display, powerful Snapdragon 865 ™ processor, and 5,000 mAh (typ) long battery life. As part of its vision, Xiaomi is determined to bring innovation to everyone at an honest price. 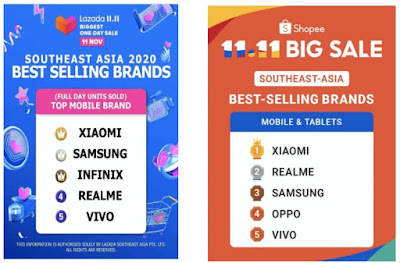 Following the 9.9. campaign this year, Xiaomi has continued to top the list as the best-selling smartphone brand in Southeast Asia on Lazada and Shopee during the 11.11 online campaign.About Xiaomi CorporationXiaomi Corporation was founded in April 2010 and listed on the Main Board of the Hong Kong Stock Exchange on July 9, 2018 (1810.HK). Xiaomi is an internet company with smartphones and smart hardware connected by an Internet of Things (IoT) platform at its core.With an equal emphasis on innovation and quality, Xiaomi continuously pursues high-quality user experience and operational efficiency. The company relentlessly builds amazing products with honest prices to let everyone in the world enjoy a better life through innovative technology.Xiaomi is currently the world’s third-largest smartphone brand, and has established the world’s leading consumer IoT platform, with 271 million smart devices connected to its platform, excluding smartphones and laptops. Xiaomi products are present in more than 90 markets around the world.In August 2020, the company made the Fortune Global 500 list for the second time, ranking 422nd, up 46 places compared to last year. It also ranked 7th among internet companies on the list. In May 2020, the company made the Forbes Global 2000 List again, and its ranking jumped to 384th.Xiaomi is a constituent of the Hang Seng Index, Hang Seng China Enterprises Index and Hang Seng TECH Index.
For more information about the company, please visit https://blog.mi.com/en/.
Posted by Boy Raket at 4:30 PM