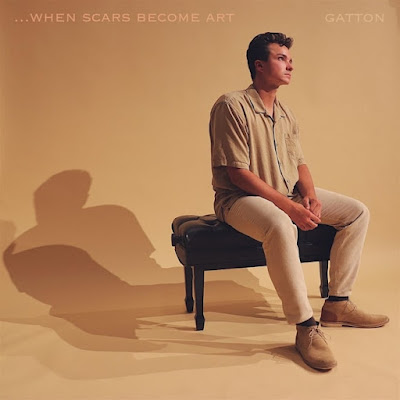 Rising artist Gatton has seen a recent explosion around his song “When Scars Become Art”, which has quickly ascended to become the fastest growing, and one of the biggest, songs in the Philippines. What started as one of the country's biggest TikTok trends has evolved into a song that has resonated with millions of people across the country.

A fan favorite, “When Scars Become Art” was originally released by Gatton in 2018. When Gatton posted a TikTok video of the song on January 19th, it immediately went viral (5.4 million views, 664,000 Likes, 6,441 comments and 900,000+ user generated content videos using the audio) and sparked the song’s incredible growth.

The acoustic pop song has a melancholy, yet hopeful feeling and explores themes of trying to turn your pain into something beautiful.

About the song, Gatton says — “When Scars Become Art is what I consider to be the thesis of my artistry. Attempting to cultivate art out of every scar. I think that is what every creative is aiming to do in some capacity. And perhaps every human being. Trying to make sense of the pain.

I wrote the song after one of the hardest seasons of my life. I had lost multiple really formative relationships and opportunities at the time and in turn lost myself. On one particular day, amidst this season engulfed by grief and sorrow, I sat down at the piano in hopes to find some healing. All I needed was a coping mechanism for the pain. I never had any intention of writing music to release it at the time, just therapy. Perhaps the purest form of writing. In a matter of 30 minutes I wrote one of the first songs I had ever written… “When Scars Become Art.” I remember in the very moment that I wrote that chorus, it was the ultimate escape. I sang it over and over and it seemed to alleviate all of my heartache for those few moments. Taking me to an inexplicable place of healing. As I was finishing up the song, one of the last lines that I wrote was “Ive heard it said that beauty is when scars become art…” I remember knowing, even then, that in some capacity, those four words would change the trajectory of my life. And they did. That year I went on to interview 85 people. Doctors, professors, therapists, widowers, counselors, singers, athletes and the list goes on. I asked them all the same 15 questions. My mission was to better understand how they created art out of their scars. I called it the “When Scars Become Art Project.”

I now have a deep knowing that those four words have and will continue to change my life because I am keenly aware that that is the best gift I have for this world. Daring to choose resilience and create something beautiful out of life’s inevitable tragedy. And I hope I can inspire people to do the same.”

With “When Scars Become Art” turning into a big hit, Gatton is planning on coming to the Philippines and Asia later this year and is also working on new, upcoming music.