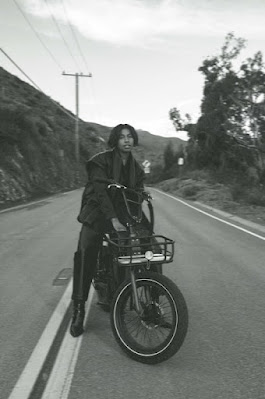 “Orion Sun's wide-eyed innocence and grounding timbre in her tone have always given her lyrics a sense of closeness, like you're right on her bedroom floor with her trying to make sense of all the conflicting signs.”

“Orion Sun is as immaculate as ever”

“Her songs are pensive, thoughtful in theme and structure. They’re soulful scenes that are often both haunting and hopeful.”

“the rising star you need to get to know now”

Critically acclaimed singer, songwriter, and producer, Orion Sun announces her newest project, Getaway, which is slated for release on March 11th via Mom + Pop. In celebration, the Brooklyn-based artist shares her insatiable new song “dirty dancer”, which was featured as Zane Lowe’s ‘World Record’, accompanied by a striking music video. Directed by Courtney Loo, the visual beautifully captures Orion Sun coming into her own with a renewed sense of purpose. The video sheds light on a more intimate side of Orion Sun as she moves through stunning choreography and delivers a beautiful depiction of vulnerability and strength, revealing the incredible depth within Orion Sun.

The ‘Getaway’ project ushers in a new chapter for Orion Sun artistically and personally; one that is shaped by her own journey of self-discovery and healing. The arrival of this new body of work serves as a true act of perseverance and sees Orion Sun stepping into her rightful position as one of today’s most essential artists.

Additionally, Orion Sun announced her debut headlining North American tour, which is set for Spring 2022. The shows kick off in New York on May 1st and wrap in Los Angeles on May 18th - full tour dates below. Tickets go on sale to the public on February 11th but fans can sign up for early access to presale tickets HERE.

25-year-old Orion Sun is firmly carving out her own lane. Unapologetically complex, her music defies the confines of genres. It features her signature style of alternative R&B that speaks deeply to her generation. Her work pulls inspiration from the greats that shaped her artistry such as Billie Holiday, Stevie Wonder, Bill Withers, John P. Kee Fred Hammond, Lauryn Hill, and others. Her previous album, Hold Space For Me, amassed over 40 million global streams and cemented Orion Sun as an artist to watch with her transformative, intimate art. It solidified her as a critical press darling by garnering large acclaim from outlets such as NPR, BBC Radio, Pitchfork, i-D, Fader, Billboard, NYLON, Hypebeast, Stereogum, and many more. Orion Sun is now a two-time 2021 Libera Awards Nominee for Breakthrough Artist/Release and Best R&B Record.

"'dirty dancer' is about feeling like you're not good enough. The thought can really consume your mind. It's about working on my shit for me, but also so I can love the best way I can, not just the best way I know how."