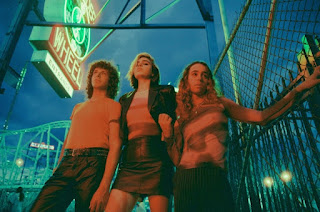 Sunflower Bean are known for their singular live performances, which has seen them perform at major festivals like Glastonbury, Governors Ball, Bonnaroo, Lollapalooza, Reading & Leeds, and tour with the likes of Beck, Cage the Elephant, Interpol, Courtney Barnett, The Pixies, The Kills, DIIV, Courtney Barnett, and Wolf Alice, and even open for Bernie Sanders during his primary campaign rallies. Now, the band is gearing up to get back on the road for a massive Spring tour in support of Headful of Sugar. Tour dates go on-sale February 11th, 10 am locally. Sign up for early access pre-sales now HERE. See below to find a show near you.

Sunflower Bean also shared Headful of Sugar’s lead single and opening track, the taut groove “Who Put You Up To This?” It’s a kiss-off to a former lover, maybe, but also a former self. “In another life I was a bitch/ In another life I was your bitch/ Here’s how it turned out,” Cumming sings, her voice alternating between the gritty and the divine, drawing comparisons to contemporary iconoclasts like St. Vincent. “Who Put You Up to This?” finds freedom in a fraught predicament, her sense of self fully divorced from the circumstances she finds herself in. The band says of the track, “Are you satisfied? Who put you up to do things that you do? Was it your own choice? Questioning your life is the first step to taking the agency to change it. Sometimes you have to let go of who you have been so that you can become who you want to be.” Listen to the track and watch the music video here.

Headful of Sugar is about outsiders disillusioned with the modern world; they search for freedom and meaning in a culture that runs on the 24-hour newscycle, soulless laptop jobs, and dozens of brands of hard seltzer. In spite of their alienation, these misfits refuse to be beaten down, buoyed by the relief found in interpersonal relationships that counteract the daily barrage of cheap entertainment and convenience. “We wanted to write about the lived experience of late capitalism, how it feels everyday, the mundanity of not knowing where every construct is supposed to ultimately lead you,” Nick Kivlen says. “The message is in the title: this is about fast pleasures, the sugar of life, the joy that comes with letting go of everything you thought mattered.”

If their acclaimed sophomore LP, Twentytwo in Blue, was a self-described “ode to the fleeting innocence of youth,” then Headful of Sugar shoves the listener into a new, dangerous world, one that is less safe but also less suffocating. This ethos offered Sunflower Bean a freedom they hadn’t experienced before. They came up as teenagers in a New York music scene oversaturated by indie and always felt like their music, designated firmly in the category of “rock,” didn’t quite fit in with the rest of the city’s output. Nevertheless, they amassed a following rivaled by few of their contemporaries, made up of young people staring down a terrifying future and finding camaraderie in the eclectic rock ‘n’ roll aesthetics championed on Sunflower Bean’s earlier work.

While Sunflower Bean have cited both contemporary and classic influences in the past, they didn’t look to the rock canon for inspiration for this new album. “We worked quickly and passionately in primary colors, following only our instinct of what inspired us in the moment,” says Kivlen. “We weren't precious about anything, there was a gleeful anarchy.” Recording largely at home allowed drummer Olive Faber to step into the role of engineer for the first time, offering Sunflower Bean a sense of solitude and safety that a traditional studio environment can’t. “We didn’t have to rely on anyone outside of the band and our producer, Jake Portrait, to get Headful of Sugar made,” Faber says. “Self-sufficiency helped us tell the story we wanted to tell.”

These songs aren’t always autobiographical, and in co-writing, the members of Sunflower Bean seek to tap into alter-egos who resonate with the listener, like archetypes in a film. Nevertheless, the songs speak to members as individuals, too. For Faber, who recently came out as transgender, the album offers up a sense of promise that a different kind of life is possible. “Even though Julia and Nick handle the lyrics, these songs speak to my experiences as a trans person. I relate to the sense of willfulness I hear in them, this urge to roll the dice and let yourself make huge life changes in pursuit of happiness,” she says.

Headful of Sugar is an album that seeks to answer the question, “What do we lose as individuals if we have no faith in the future?” And, conversely, the band finds resolution instead with, “What might we gain?”

Email ThisBlogThis!Share to TwitterShare to FacebookShare to Pinterest
Labels: #BoyRaket, Headful of Sugar, MUSIC, MUSIC ALBUM, Otherside, SINGER, songs, SUNFLOWER BEAN, Who Put You Up To This