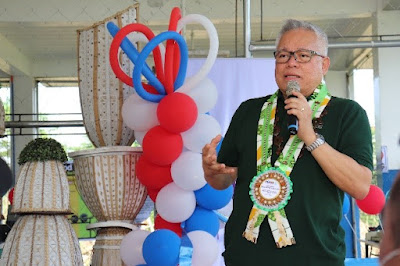 The Department of Trade and Industry (DTI) brought silver lining to local folks as the agency successfully turned over equipment under the Shared Service Facility (SSF) program providing livelihood support to displaced carpenters, welders, painters, and other skilled workers in the northern barangays of Tacloban City, March 22.

These construction workers once lived in the city proper near the Cancabato Bay who were relocated by the local government to northern barangays after their homes had been devastated by Typhoon Yolanda.Lack of livelihood is the top challenge faced by these men who had been displaced from their place of work. Some of them are fishermen who, by their current situation, are far off the shore and were forced to shift to the construction industry for employment and income.The local government of Tacloban saw this opportunity to capacitate these men thru TESDA trainings and provision of equipment via DTI’s SSF program. This will help them become productive members of the society.“Ang role namin ay magbigay ng equipment at magpalakas sa ating mga kababayan. Maaari rin po kayong matulungan ng DTI through our livelihood programs para magkaroon ng tuluy-tuloy na kabuhayan,” said Trade Secretary Ramon Lopez.SSF is one of DTI’s programs to address bottlenecks in the value chain of priority industries and enhance productivity of micro, small, and medium enterprises (MSMEs) by providing technical support and processing or manufacturing equipment in a shared system.The initiative complements the priority program of the LGU to provide livelihoods in the relocated communities of Tacloban. These areas came from hardly-hit barangays of Typhoon Yolanda in 2013 and were displaced from their place of livelihood. The project is expected to gen erate jobs and income for the skilled workers in the relocated sites.The project amounts to PHP 928,400 for the tools and equipment used for basic construction. The potential beneficiaries are skilled graduates of TESDA NC II and accredited schools for welding, carpentry, and painters.Secretary Lopez graced the said launching together with DTI Regional Operations Group (ROG) Undersecretary Blesila Lantayona, Assistant Secretaries Asteria Caberte, Demphna Du-Naga, and Dominic Tolentino, and Regional Director Celerina Bato.DTI encourages the promotion of MSMEs to a higher level where they could tap a better production facility for wider market share and be integrated with the global supply chain.
Posted by Boy Raket at 2:00 AM