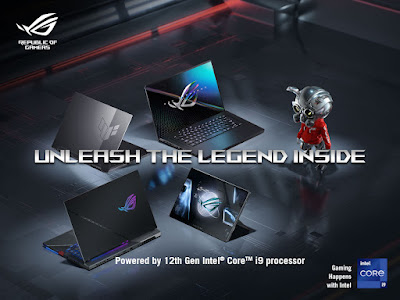 PASIG CITY, Philippines, March 26, 2022 – New Legends are born. The new ROG and TUF Gaming laptops powered by the 12th Generation Intel CPUs have been unleashed in the Philippines. Led by ROG’s innovation product, the ROG Flow Z13, together with the new-and-improved models of the ROG Strix SCAR, ROG Zephyrus M16, TUF Dash F15, and TUF Gaming F15/17, ROG is primed to take 2022 by storm.

Heralded by new form factors, the fastest gaming CPUs in the market and a whole host of new technologies, this new lineup is unmatched in the market in terms of performance across the board from mainstream level to the highest spec versions.

At the heart of these new models is the new 12th Generation Intel® Core™ mobile processors that redefine gaming with breakthrough performance. With the combination of Performance cores and Efficient cores that deliver scalable, multi-threaded performance that works seamlessly with the operating system

“This new lineup of ASUS ROG 12th Gen laptops gives gamers cutting-edge technology right at their fingertips,” said Dino Strkljevic, Client Lead, Intel Client Computing Group, APJ Territory. “With our 12th Gen Intel Core processors, we've brought the biggest shift in the x86 architecture in over a decade. The new Performance cores on our 12th generation processors are the highest performant core we've ever made, and the E-cores are designed to handle the heavy multi-tasking and background tasks, so that your game can run at its peak performance or your video render can finish in record time. Besides industry leading performance, we're also bringing industry-first DDR5 memory compatibility, Thunderbolt 4 and Wi-Fi6e, making the 12th Gen Intel Core processors the best for gamers.”

Also powering the new line of ROG laptops is NVIDIA’s new RTX GPUs up to RTX 3080 Ti, which deliver ray tracing and the best graphics performance possible on a mobile device. In addition, users now have a choice between maximum graphical performance and extreme battery life with the MUX switch across all product lines, even for the TUF gaming lineup.

New innovative form factors with the ROG Flow Z13, a revamped Strix SCAR, Zephyrus M16 and TUF Gaming lineup await gamers who have been highly anticipating this new chapter in the legend of the Republic. 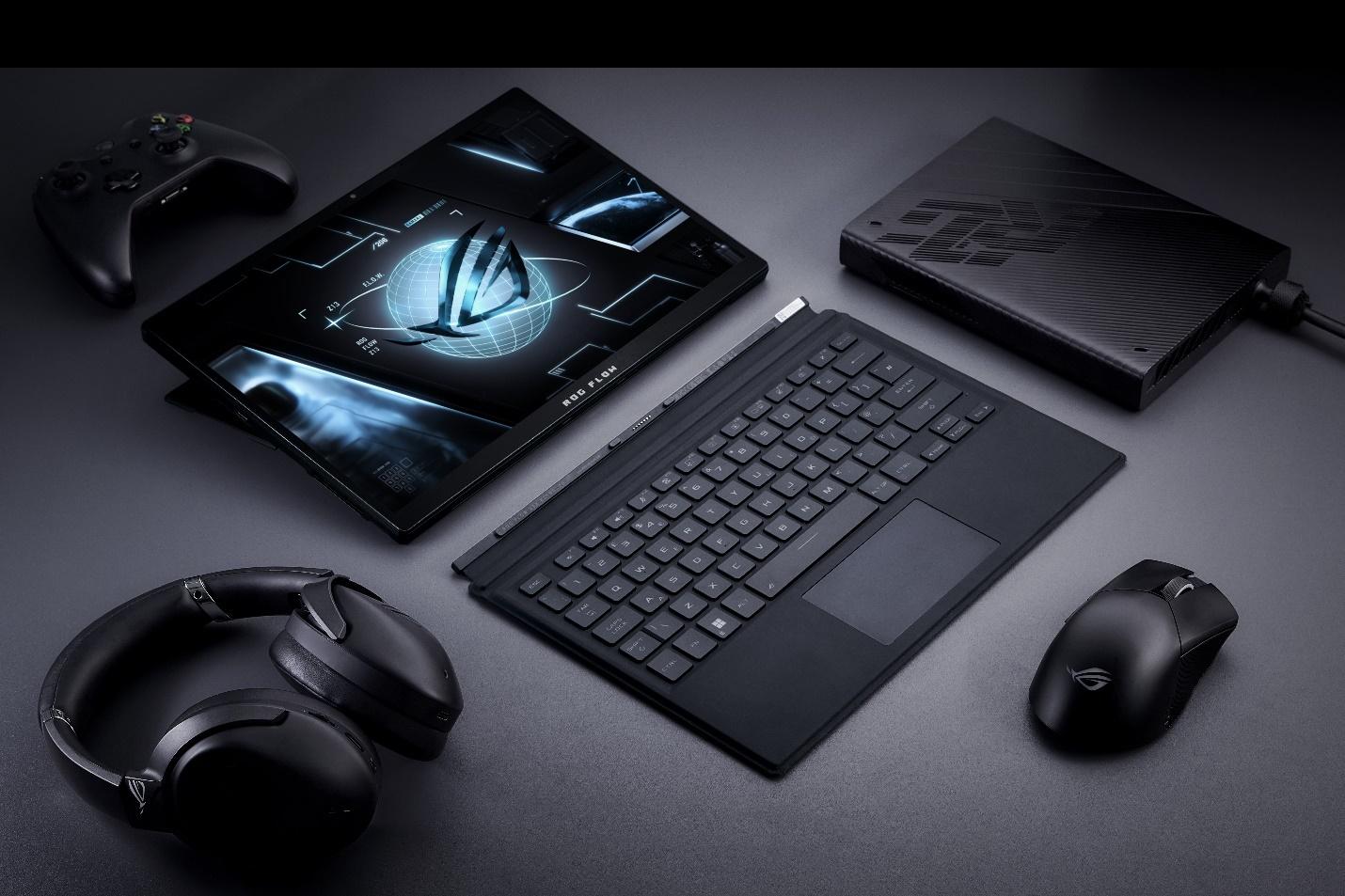 The ROG Flow Z13 combines the best aspects of tablet mobility with PC versatility to create an all-new gaming experience. A tablet form factor allows the Z13 to stay incredibly light and slim at just 1.1 kg and 12 mm thick, while packing the gaming power of much larger devices. Built to accommodate all styles of play, mouse, gamepad and touch are all flawless on the Z13.

Inspired by the ROG Mothership, the Flow Z13 houses its components behind the screen. This unconventional layout for a gaming device allows the Z13 to stand high above a desk or table when in use, granting much better access to fresh air than traditional gaming laptops. In addition, the lack of a hinge mechanism allows for a wider vapor chamber and larger fans thanks to the extra space inside the chassis, all while keeping the machine just 12 mm thick.

The signature feature of the ROG Flow Z13 is the screen cover that also works as a fully functional detachable RGB keyboard with 1.7 mm of travel. Multiple USB ports allow for quick access to precision and accuracy for the games and apps that demand it, and a built-in kickstand that can be opened to 170° for optimal usage in nearly any scenario. This means that when you detach the keyboard, the Z13 also excels when used to play titles that support gamepads or your favorite USB keyboard and mouse peripherals as a game console, or mobile and touch-compatible games with its display. 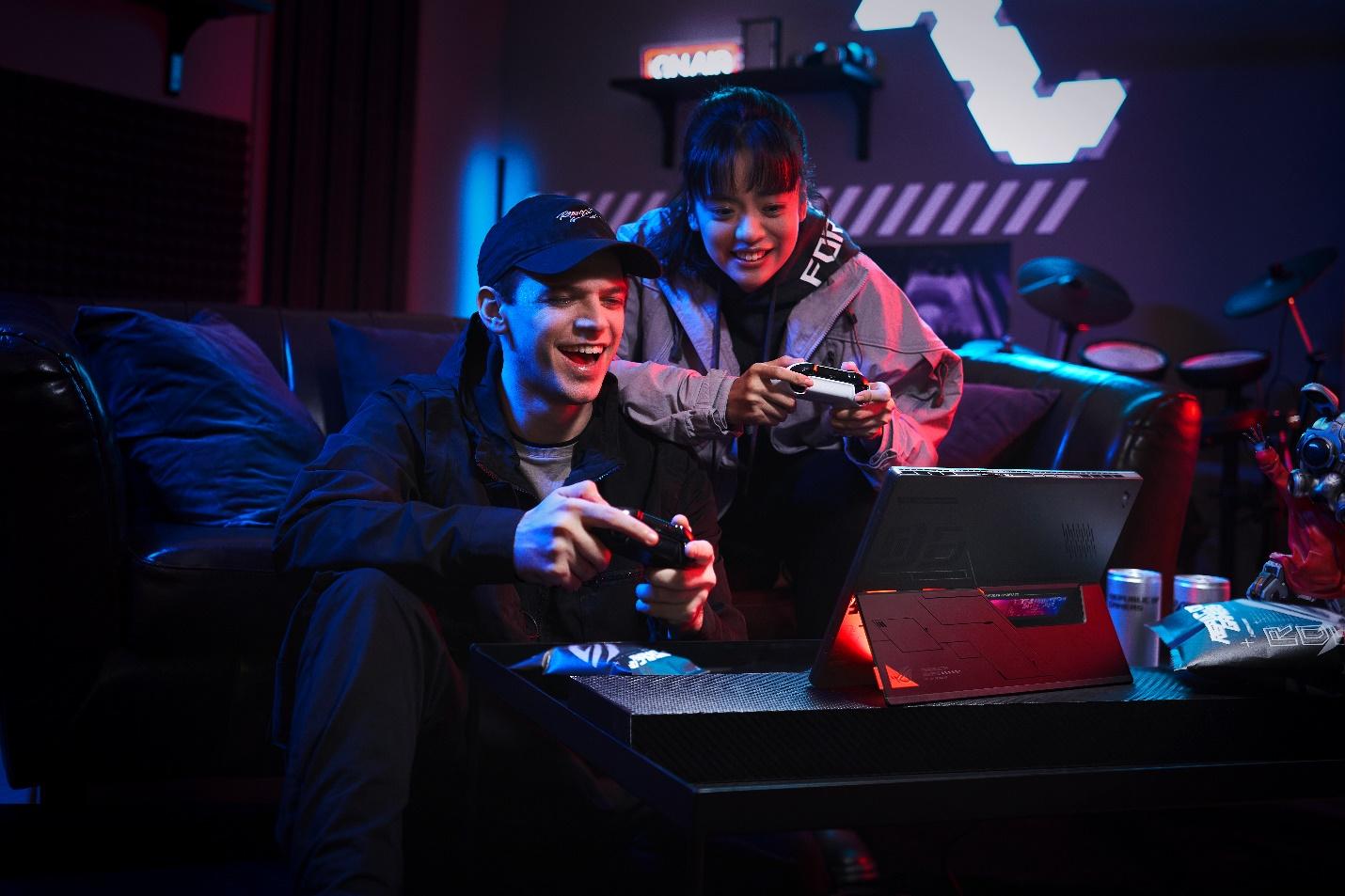 The ROG Flow Z13 packs plenty of gaming horsepower in an ultra-thin, light chassis — up to a 14-core Intel Core i7-12700H CPU, an NVIDIA GeForce RTX 3050 GPU, a MUX Switch and 5200 MHz LPDDR5 memory. All this is housed in a retro-futurist design inspired by the 20th-century Space Race encompassing ROG’s vision for the future of gaming: ultimate portability.

For extra gaming horsepower and I/O expansion, Flow Z13 and the updated 2022 Flow X13 are compatible with the XG Mobile family of external GPUs. Gamers can connect it to the 2021 XG Mobile with an NVIDIA GeForce RTX 3080, or this year’s new addition to the XG Mobile family, which includes an AMD Radeon RX 6850M XT GPU. With additional USB ports, DisplayPort and HDMI, and Ethernet, the XG Mobile is ready for anything. 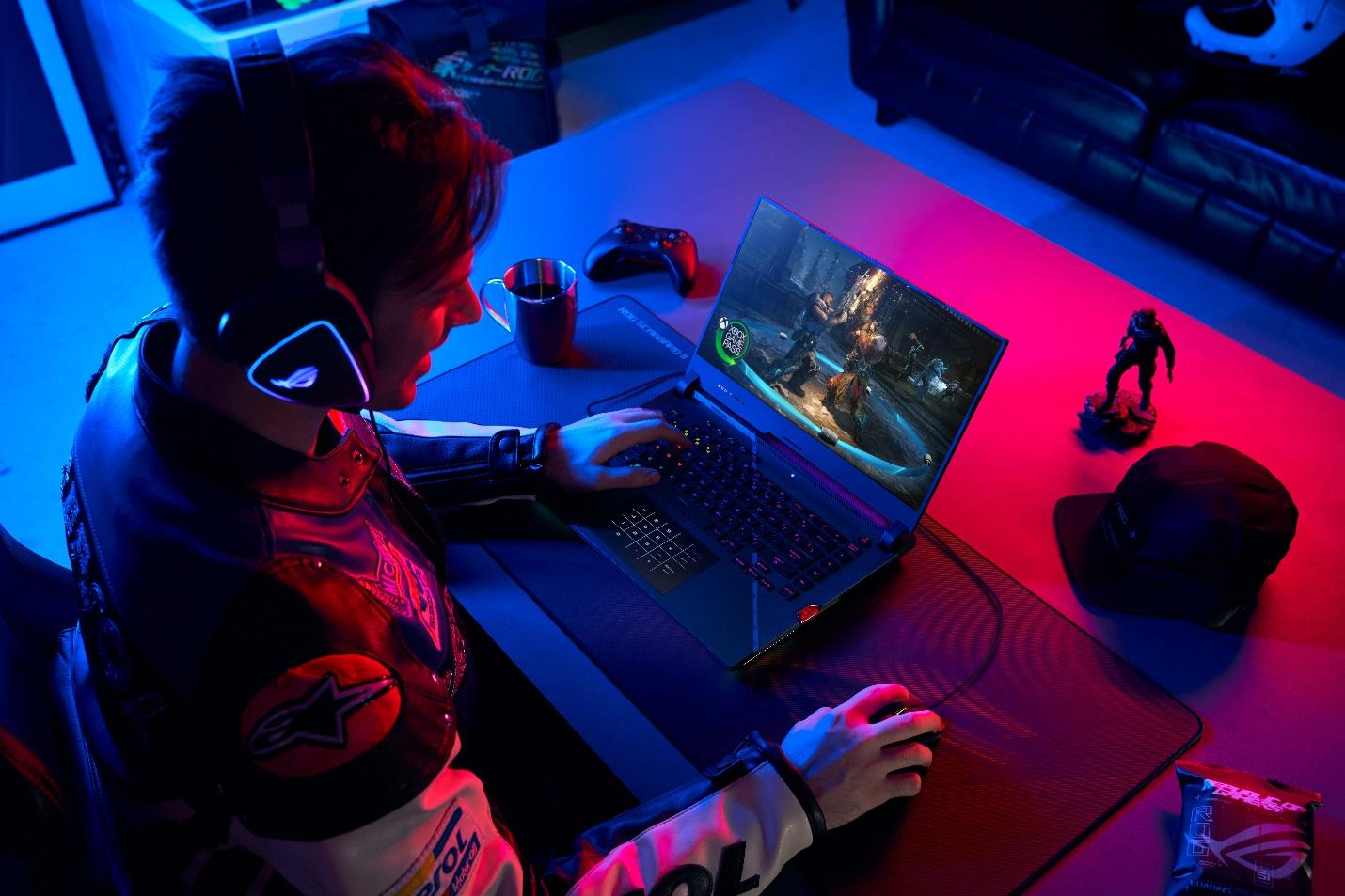 The ROG Strix SCAR 15 and 17 is ready to take e-sports and triple A gaming by storm. Powered by up to an Intel Core™ i9-12900H CPU and paired with up to an NVIDIA GeForce RTX™ 3080 Ti GPU with a 150 W max TGP, this machine is designed to keep gamers on top of the leaderboard. Next-generation DDR5 RAM clocked to 4800 MHz and a PCIe® Gen 4x4 SSD keep the machine feeling responsive and snappy even during intensive tasks.

A dedicated MUX Switch helps to reduce latency and further increase performance when gaming by creating a more efficient path from the GPU to the display with an average performance boost of 15% when enabled, or users can go back into hybrid mode when battery life is more important.

The Strix SCAR uses liquid metal on the CPU for improved heat transfer and has been updated to use Thermal Grizzly’s latest and greatest Conductonaut Extreme solution. This high-end thermal compound lowers temperatures by up to 15° C compared to traditional thermal pastes, delivering higher sustained boost clocks and preventing the fans from ramping up as quickly for reduced noise levels.

This year’s Strix SCAR 15 and 17 offers a QHD 240hz resolution panel, with Dolby Vision and Adaptive-Sync with 100% DCI-P3 color accuracy – the perfect balance of clarity and fast refresh rate for your games. Dolby Atmos and Hi-Res audio support are also available, as well as the addition of an HDMI 2.1 port for 4k/120hz or 8k displays as well as Thunderbolt™ 4 for your peripherals. Customizable Armor Caps and Keystone 2 from the previous version are also available for users who want to personalize their SCAR.

The ROG Strix Scar 15 and 17 are available in the following variants locally:

THRILL YOUR SENSES TO THE NEXT LEVEL: ROG Zephyrus M16 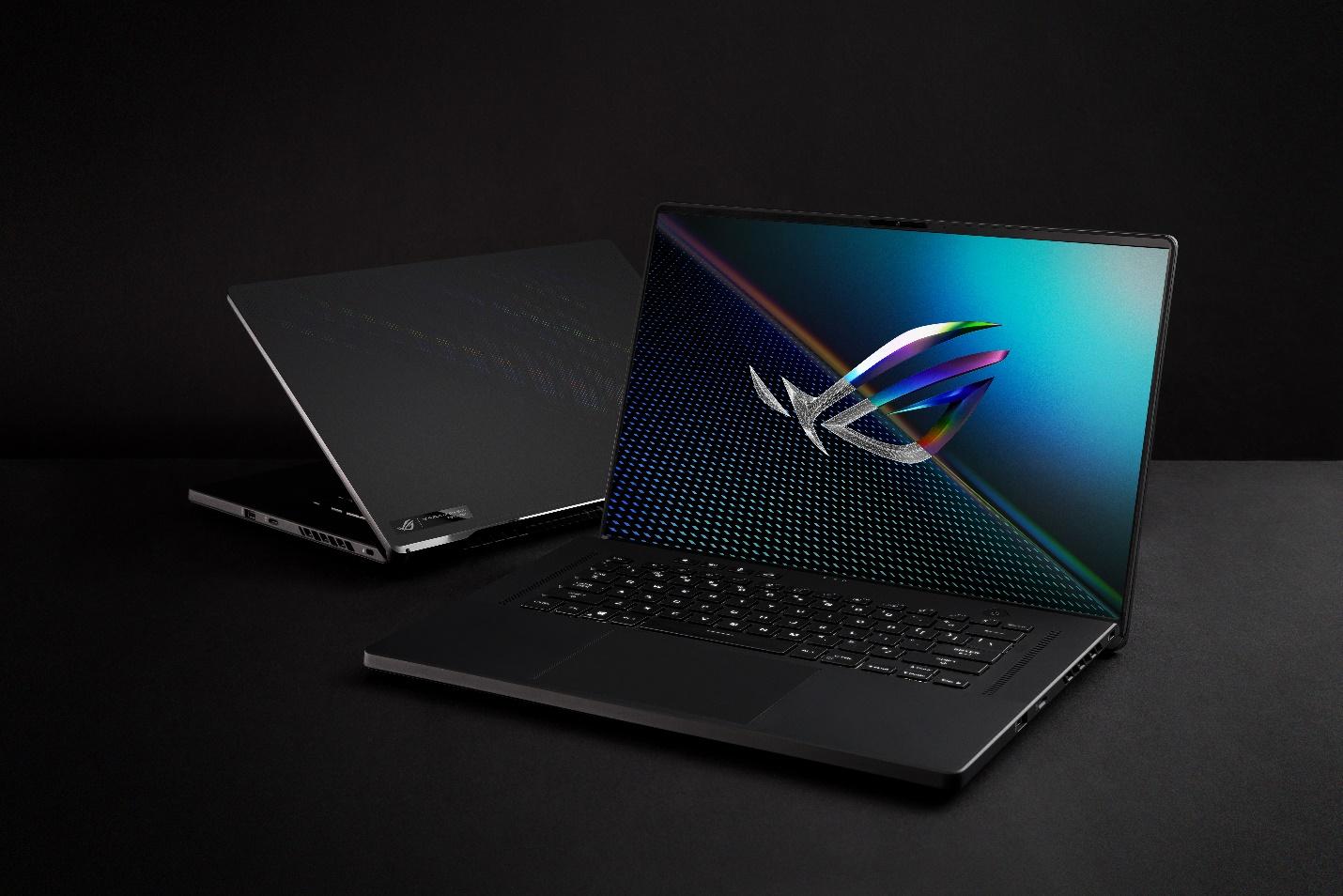 Last year, the Zephyrus M16 was the first ROG laptop that fits an immersive 16-inch display inside an ultra-slim 15-inch chassis. And it’s now made even better with the revamped 2022 edition.

The Zephyrus M16 is now one of the first ROG laptops to feature ROG’s brand-new Nebula display, which offers 16:10 aspect ratio with 165 Hz refresh rate and QHD resolution with 500 nits of peak brightness, 100% coverage of the DCI-P3 color gamut, and a 3ms response time — with Dolby Vision, Adaptive Sync, and Pantone® validation for a stunning, color-accurate experience that minimizes stuttering and tearing.

Aside from the gorgeous 94% screen-to-body ratio display, the Zephyrus M16 is now powered by up to an Intel Core™ i9-12900H CPU and paired with up to an NVIDIA GeForce RTX™ 3080 Ti GPU at up to 120W TGP with Dynamic boost. In addition, up to 32GB of DDR5-4800 RAM and a blazing fast 2TB PCIe® 4.0 storage powers this Thin and Light beast, worthy of the name Zephyrus.

ROG Intelligent Cooling with Liquid Metal helps keep the Zephyrus M16 running in tip top shape, and a great 6-speaker setup with Dolby Atmos support makes this a multimedia machine like no other. With the addition of the 180° ErgoLift hinge, Built-in IR Webcam with Windows Hello unlock, and Thunderbolt 4, the revamped Zephyrus M16 is ready to thrill your senses 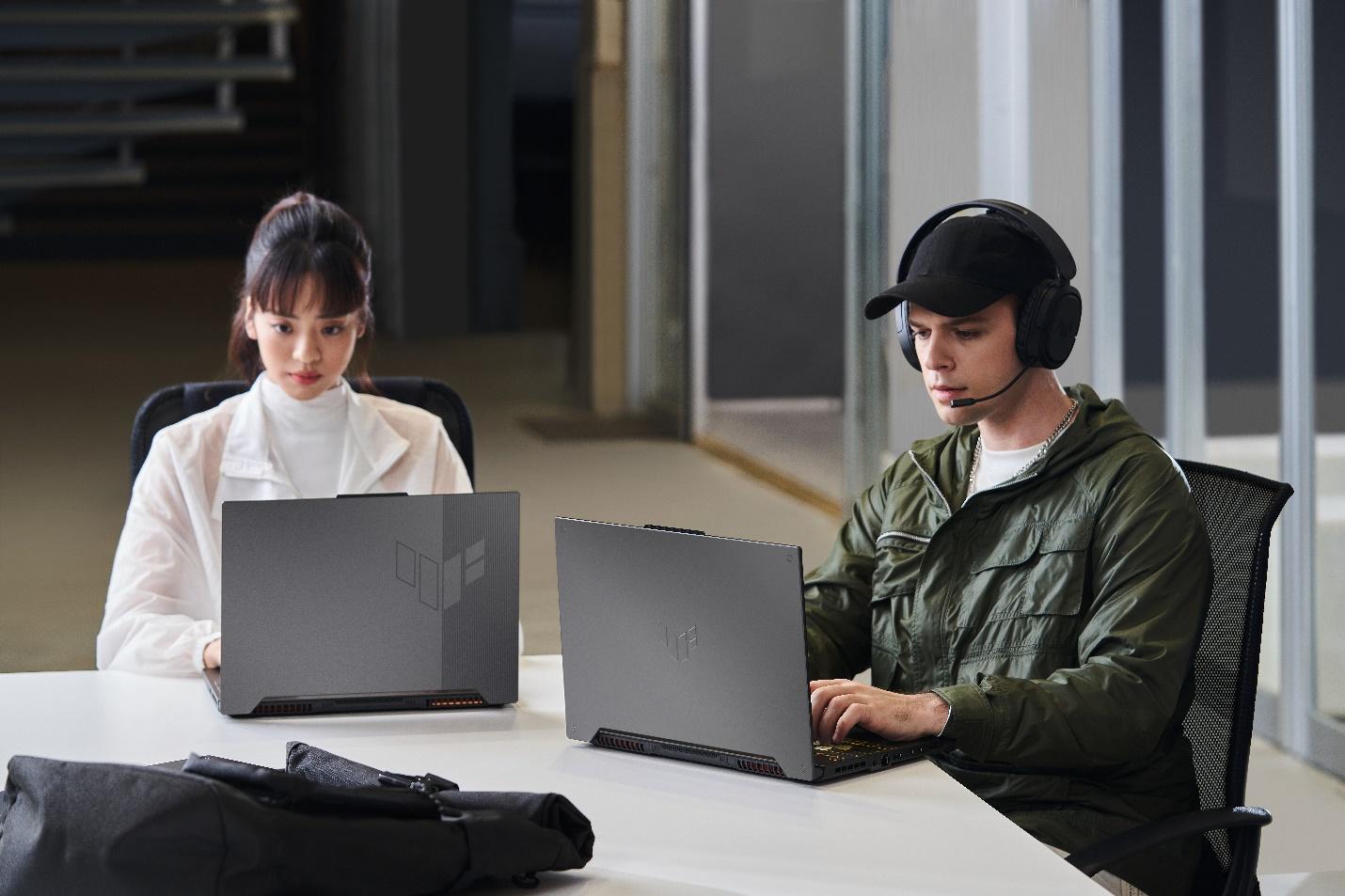 The TUF Gaming family is built on the core principle of providing gamers with fantastic performance without breaking the bank, and ASUS continues that tradition by offering high-end hardware and a chassis design that’s more refined than previous generations. The new TUF Gaming F15 and F17 is inspired by mecha anime - with subtle nods to the prowess of these machines can be found on the chassis of the Jaeger Gray and Mecha Gray design options. As is tradition for TUF gaming, these rugged machines still meet the MIL-STD-810H specification and are tested to withstand intense heat, cold, humidity and vibration for withstanding the challenges of daily life.

The 2022 ASUS TUF Gaming F15 and F17 are now upgraded with the 12th Generation Intel Core™ i7-12700H processor and an NVIDIA GeForce RTX™ 3060 Laptop GPU with a much higher 140-watt max TGP for a significant jump in performance compared to the previous versions.

New for 2022, all TUF Gaming laptops feature a hardware MUX switch and DDR5 4800MHz RAM which is unprecedented for laptops of its class. This means that the TUF Gaming F15 and F17 are the best options for mainstream gamers looking for the best performance while delivering unmatched value for money.

Fast-paced gaming also requires high refresh rate displays, which allow in-game movements to appear much more fluid, so gamers can track enemies with precision. All 2022 TUF laptops are equipped with high refresh rate display options, including up to a FHD 300 Hz Adaptive-Sync for the fastest competitive shooters with buttery smooth visuals that are sure to put you at a competitive edge.

With an improved cooling system featuring redesigned 84-blade Arc Flow Fans™ for up to 13% better airflow, Thunderbolt 4 for additional peripherals, 90 WHr battery and Fast-charging technology, the latest version of the TUF Gaming F15 and F17 is the most exciting one yet. 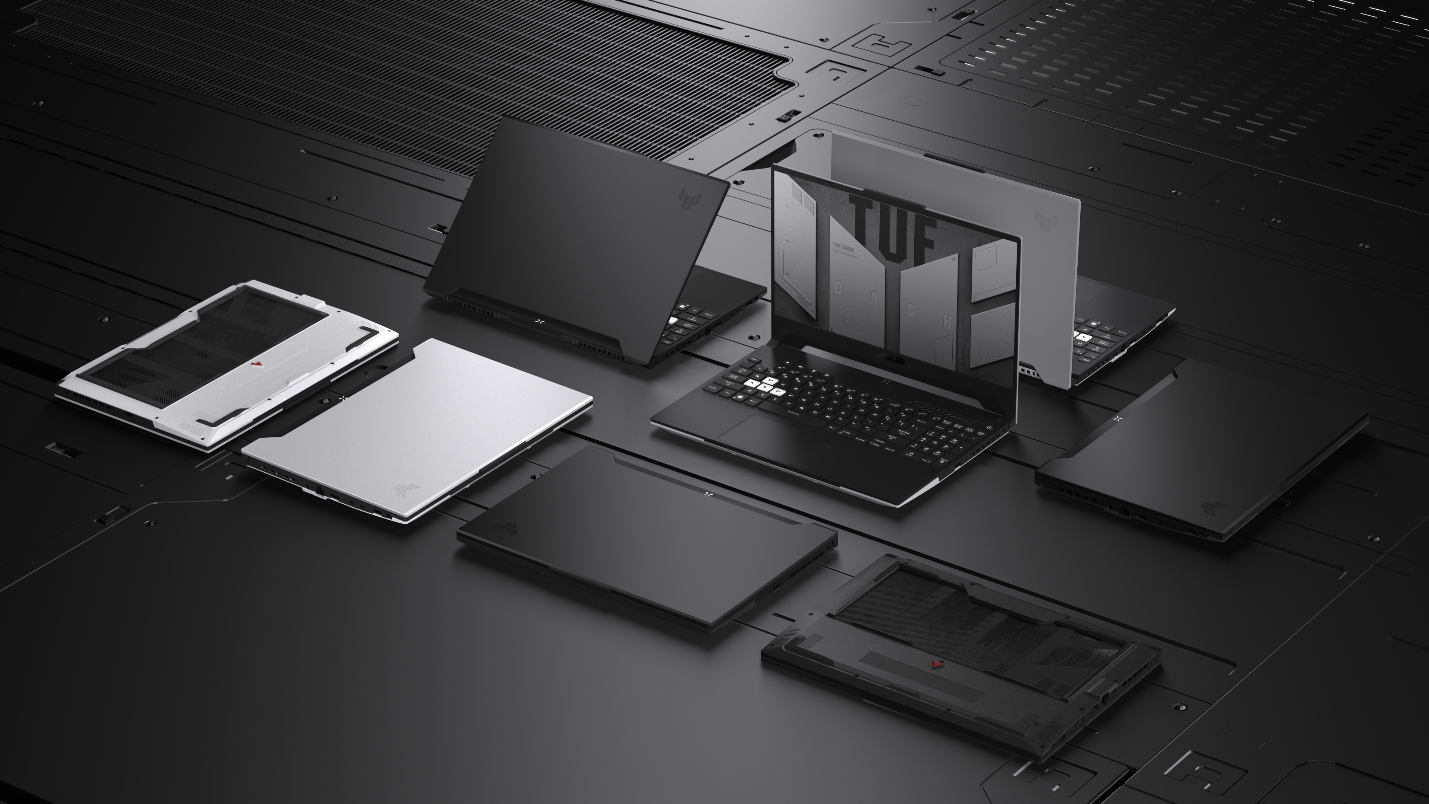 The TUF Dash F15 is now also revamped for 2022. Retaining the thin and light form factor unmatched for its price point in the gaming laptop category.

Sporting several upgrades including a full 45-Watt 12th Generation Intel CPU up to a 10-core Intel Core i7-12650H CPU and a higher wattage NVIDIA GeForce RTX™ 3060 Laptop GPU with MUX Switch means much faster performance than the previous version of the TUF Dash in any game or any task.

The screen has also been upgraded to make the TUF Dash F15 also a serious productivity machine. Now sporting up to a QHD 165hz Adaptive-Sync display with 100% DCI-P3 which means very enjoyable fast-paced gaming and a color accurate screen for content creation at a very crisp resolution.

Despite being thin and light, the TUF Dash F15 is also powered by DDR5-4800MHz RAM, fast PCIE SSD and Military Grade Durability. Cooling is also no slouch with a comprehensive cooling solution with the 84-blade Arc Flow Fans™ and anti-dust tunnels for longer operation.

Thunderbolt 4, a new Built-in HD Camera, Fast Charging Technology round out this bang-for-buck machine worthy of being called an upgrade.

The new TUF Dash F15 comes in 2 stylish colors: Off Black and Moonlight White and will be available in the following models:

Like and follow the official ROG social media pages to get latest updates as well as other ROG products and events:

Head on over to your nearest ASUS and ROG Concept stores and get your next ROG 2022 Gaming Laptop with the latest Intel 12th Gen CPU! Head on here for the complete list of stores: https://asus.me/ASUSPHWhereToBuyLaptopsAndDesktops