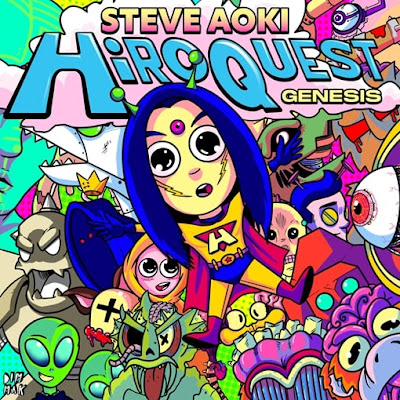 June 15, 2022 (Los Angeles, CA) - 2x-Grammy-nominated artist and producer Steve Aoki announces his new full-length album HiROQUEST out September 16, 2022. The highly anticipated record features collaborations with a wide variety of artists in all genres including Taking Back Sunday, Kane Brown, Mod Sun, PnB Rock, Georgia Ku, Bryce Vine, Santa Fe Klan, Lil Xan, Goody Grace, and more. As part of the album release, Aoki is continuing his relationship with MetaZoo Games to create limited edition playing cards available with the purchase of HiROQUEST CDs. The CDs and digital album are available for pre-sale, along with more information on the MetaZoo collaboration at www.HiROQUEST.com.

HiROQUEST features the recent singles “Just Us Two” with Taking Back Sunday, “Kult” with grandson and Jasiah, as well as “Save Me” featuring HRVY, and “Kong 2.0” with Natanael Cano. Aoki’s new album taps into the angst, anxiety and pent-up energy felt during lockdown and offers a dynamic soundtrack to what has become the new normal. The tracks draw equally on Aoki’s history with alternative rock bands and embrace contemporary musical trends like Latin and pop while retaining his signature EDM aesthetic.

“The music is a connecting tissue to this universe that I'm creating,” Aoki explains. “This album tells a fantastical story, but it’s also about freedom from restraint. I went right back to my roots—that raw, rock energy and that became the basis of it. From there, I began to explore everything and it sprouted into so many different genres.”

The songs of HiROQUEST will comprise five chapters, each detailing a different mythological faction, and the album opens the door for fans to enter a vast world that threads together the music with a new collectible trading card game co-created with MetaZoo Games, which Aoki co-founded and launched in March of 2021.

For a limited time and while inventory lasts, the trading cards will be available as an insert in the CD of Aoki’s new album, with each CD containing one card from the MetaZoo HiROQUEST set. This special limited presale will be launching exclusively at www.HIROQUEST.com on June 16th at 9am PT/ 12pm ET. Each CD is priced at $5.99.

The MetaZoo HiROQUEST storyline lives in a future world full of chaos, where “Beasties” run rampant through the Cryptid Nation led by a character named Indrid Cold. The hero protagonist, of the group Evergreen Casters, named Hiro, is on a quest to collect Pallet Rings and defeat legions of harmful Zombies, Robots, AI, etc. along the way. MetaZoo promises it to be an adventure that goes down in history in the world of future cryptids.

Fans can expect HiROQUEST to be an epic, multi-genre collection of solo and collaborative songs with a world-building story that extends beyond the music itself. Always looking to break down barriers and unite people together in their shared passions, Aoki hopes HiROQUEST’s innovative and multi-layered output will serve as a great connector for bringing audiences together. “Almost everything I do is some level of collaboration, whether it’s fashion, technology, music, art or culture,” Aoki shares. “I love this idea that we can come together and put aside the things from our past that may have hardened or jaded us, and just be free.”

Boasting a 77 million average monthly reach across all his platforms, 2x-Grammy-nominated music producer, artist, fashion designer, entrepreneur and NFT visionary Steve Aoki is one of the most successful cross-genre artists in the world. A Guinness World Record holder for the “Most Traveled Musician in a Single Calendar Year,” Aoki has performed at nearly every top festival around the world, including Coachella, Ultra Music Festival, Lollapalooza, Fuji Rock Festival, Tomorrowland and Electric Daisy Carnival.

Since the release of his 2012 debut solo album, Wonderland, which earned him his first Grammy nomination for Best Dance/Electronica Album, Aoki has collaborated with an impressive list of varied artists, including BTS, Maluma, Snoop Dogg, Linkin Park, blink-182, One Direction’s Louis Tomlinson, Machine Gun Kelly, Lil Uzi Vert, 2 Chainz and Daddy Yankee, and released three Platinum singles, six Gold singles and produced over ten Top 10 radio records. After unveiling four Neon Future albums, the most recent being Neon Future IV in 2020, Aoki’s next album HiROQUEST is due out on September 16.

Aoki approaches each new endeavor with the same sense of dedication he’s put into his past achievements, including his critically-acclaimed 2019 memoir BLUE: The Color of Noise and THE AOKI FOUNDATION, which he founded in 2012 to support organizations in brain science and its research. His influential record label Dim Mak, celebrated its 25th anniversary in 2021, known for being a launching pad to the careers of prominent acts like Bloc Party, The Chainsmokers, Bloody Beetroots and The Kills. Most recently, Aoki created the A0K1VERSE, an NFT membership community, powered by the Passport, that welcomes his fans to both virtual and real-world experiences. In whatever space he enters, Aoki offers a community for those who need it most.