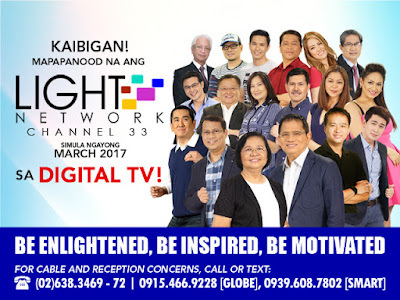 Light Network channel 33 is achieving greater innovation as it begins its official broadcast on Digital Television this coming March 2017! Through this exciting breakthrough, viewers in Mega Manila will soon be able to experience a clearer and highly-improved video and sound quality of Light Network in their televisions. Once official broadcast begins, people can now watch Light Network anytime and anywhere because not only will the channel be available on digital boxes and digital-ready televisions, but it could also be accessed through handheld devices such as tablets, smartphones and other gadgets.
The “digitalization” is the process of converting our current Analog Television broadcasting into Digital Terrestrial Television (DTT), which simply means that our existing television technology will be transformed into an upgraded, higher quality of broadcast system. Through this digital improvement, Light Network will soon be available on multiple digital viewing platforms—broadening its horizon among the television programming sphere.
In an interview with Engr. Antonio Soriano, the Vice President of Technical Operations for Light Network, he said that he is excited for the upcoming Digitalization of Light Network, because the channel had long since been prepared for this huge digital switchover. “Tayo ang unang nag-convert from Analog to Digital transmitter. Wala nang test -broadcast. Official broadcast na agad.” He also said that not all channels are ready to make the digital “switch”, making Light Network the first channel in the  Philippines to migrate to the exciting domain of Digital TV, while maintaining its frequency on Channel 33.
According to the National Telecommunications Commission (NTC), once the innovative technology of Digitalization is fully implemented, it would not only deliver better image and sound quality to our television channels, but it would also be able to provide features such as datacasting, multi-channel platform, One Seg, and most importantly, the Emergency Warning Broadcast System (EWBS), which is used to transmit nationwide warning announcements in times of earthquakes, tsunamis, or other high-alert disasters.
Engr. Antonio Soriano further stated that these features are just few of the many benefits of Digital TV. According to him, through the other upcoming advancements in Digitalization, television will finally regain its essential standing in the lives of people, as compared to the rising media usage for mobile devices. “Yes. Maibabalik ang TV bilang prime Media tool,” he concluded.
*This is Press Release
Posted by Boy Raket at 9:40 PM