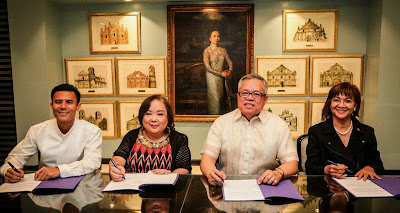 Serves as the fourth opening of the all-Filipino concept store that offers the best products from Philippine micro, small and medium enterprises (MSMEs), including the next generation One Town, One Product (OTOP) offerings, Go Lokal! is in line with the Trade Department’s initiative to empower MSMEs by providing market opportunities for them to be discovered in the mainstream market. Aside from providing market access to MSME products, Go Lokal! is a platform for new entrepreneurs to test the marketability of their products without fear of losing commercial costs because their experience is free of charge. Also in the photo are Trade Undersecretary for Industry Promotions Group Nora Terrado (rightmost) and Rustan’s Commercial Corporation President Zenaida Tantoco (center L).
Posted by Boy Raket at 5:36 PM