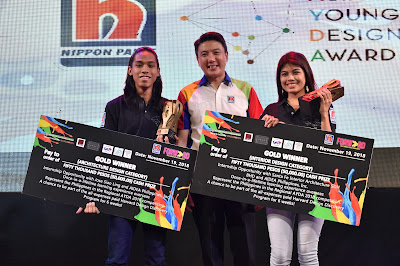 Nippon Paint (Coatings) Philippines, Inc. announced recently the winners for the Philippine edition of the Asia Young Designer Award (2018) in a ceremony held recently in this city.

For the Architecture category, the Gold award with a Php 50,000 cash prize was awarded to Prince Lu of UP Mindanao, while the Silver award with a Php 30,000 prize went to Megan Recato of UP Diliman.

Lu’s winning design, called “Neokamaigen,” is a futuristic city concept that hopes to answer housing needs in the future and prepare the Philippines for the melting of the ice glaciers that will raise water levels around the globe. Serino, on the other hand, came up with “Gunita,” a greenhouse cemetery concept that will deal with social issues like environmental deterioration and land insufficiency. This space-saving cemetery places the dead vertically inside a Manunggul Jar, a pre-historic practice where the jar serves as a burial pod. 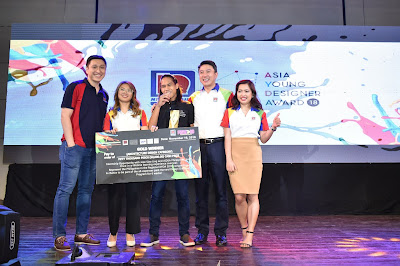 As Gold awardees for AYDA 2018, which carried the theme “FORWARD: Challenging Design Boundaries,” Lu and Serino will go to the AYDA 2018 Regional Finals, which will be held in Singapore and compete with the best Architecture and Interior Design students in Asia. They will vie for the chance to be included in the Harvard University Graduate School of Design’s Design Discovery Program.

Aside from the major prizes, special prizes were also handed out during the glittering ceremony. For Architecture, the Best Color Concept award went to Eunice Ignacio of UST, while Best Green Innovation was collared by Jan Melvin of the Technological Institute of the Philippines. Jericho Calderon of the Far Eastern University (FEU) won the People’s Choice award, and the Most Supportive School award went to FEU with 217 entries. As for the Interior Design category, Best Color Concept award went to Cristiane Macarabe of University of San Carlos, while Nino Tayao of College of St. Benilde won both the Best Green Innovation and People’s Choice award. UST was declared the Most Supportive school for Interior Design with 36 entries.

“This year’s entries were truly out of the box and very creative, perhaps triggered by this year’s theme. Since Nippon Paint became part of AYDA, we know the entries to be very strong and in fact, we almost won the regionals before. This year, we’re optimistic that a Filipino will go to Harvard,” declares Michael Francisco, Nippon Paint (Coatings) Philippines General Manager. 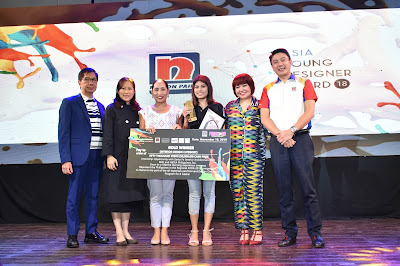 He said AYDA 2018 is the perfect opportunity to highlight the best of the country and showcase the brilliance of the youth. He also thanked the mentors and academic partners who selflessly guided, motivated and shared their expertise to the students, and for allowing them to join. Nippon Paint, he said, is proud to shine the spotlight on these great talents through AYDA 2018.

For more details, go to www.youngdesigneraward.ph or visit www.nipponpaint.ph.
Posted by Boy Raket at 5:57 PM