RINGSTAR PROMOTER SCOTT FARRELL’S PAST FUELS HIS DRIVE TO SUCCESS 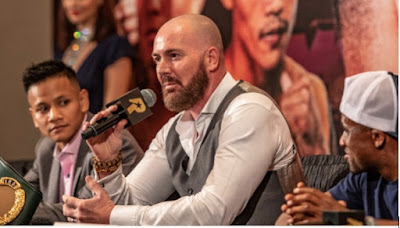 Boxing fans seem to never tire of the age-old story of the boxer who came from a hard scrabble, dead-end background and made it to the top with nothing but true grit, determination and the sheer force of his will.  It’s a timeless and commonplace tale that keeps all followers of the sweet science continually coming back for more.
It’s not often, though, that we come across a boxing promoter with similar hard luck credentials.  But for Scott Patrick Farrell, the tough life of his youth informs and infuses everything he’s about today. And as the Ringstar founder looks towards another lineup of major promotions in 2019, those experiences will continue to influence and drive everything he does.
Farrell’s journey to building one of Asia’s largest media properties began in the early 1970’s on the grey and grim streets of Hucknall, a small, dreary mining town in the county of Nottinghamshire, England. As a kid, the future seemed as bleak as the surroundings, and your options were slim.
“You had three choices in my neighborhood,” Farrell recalled recently.  “Glue sniffing, being bullied, or fighting. I was bullied quite bad as a kid. I had ginger hair, freckles and was from an Irish family background. The 1970’s were quite tough growing up, especially on the council estates where you regularly had to fight just to get home from school. I chose after being beaten on most occasions to learn how to fight.”

Like so many boxing fans, Farrell learned to love the sweet science by watching fights at the side of his dad. “My first memory of boxing is watching with my dad one Saturday afternoon, on a black and white TV,” Farrell said. “All you could see was the two pugilists in the ring surrounded by a cigarette smoking audience and some awful commentary. However, I was hooked and just needed to know more.
“My dad loved boxing and was quite a tough guy himself, all the big fights that we could see we would watch together. Or if there was a local fight happening around Nottingham we would go along and support.”
Farrell recalls two names that made the most impression on him as a kid; Muhammad Ali and Rocky Marciano.

“They were the first two names that stuck in my head as a kid,” Farrell said. “Reason being my dad always had his version of them and why he respected them as professional boxers and human beings. At that time I was too young to know very much about them and their careers, but I was fascinated by the stories of their fights and lives in and outside of the ring. This was another hook when I knew I wanted to be a boxer.” But while Farrell remained fascinated with Ali and Marciano, he remembers one particular fight that pushed him to take the big leap into the ring; the 1990 war between Chris Eubank and Nigel Benn, which has become a classic in boxing lore.

“I loved that fight and the build-up. I liked them both for different reasons. I had been spending time in the boxing gyms, hitting bags, doing some work on the mitts and the occasional sparring but after that fight I just wanted to take things a step higher and compete myself.” Farrell took several amateur fights, but quickly realized his limitations. “I had tons of heart, and I will fight anyone you put in front of me,” he said. “But I seemed to lack certain skills other fighters seemed so natural to develop.” Farrell would eventually end up a half a world away in Singapore and China. He started a family, got into business, had plenty of ups, and an equal amount of downs. But like anyone who learns to love boxing at an early age, the pugilism itch never left him.

Several years ago, Farrell found himself in transition and decided it was time to go all in. Asia was home to so many great fighters, he thought, but nobody has tried to tie them all together into one promotion that all of Asia, and the world, would want to watch.  And he didn’t want to start just any promotion based solely around hype. The fights had to be really good, with quality fighters engaged in strong matchups, and great story lines. Thus, Ringstar was born in October 2016. It doesn’t take a business school degree to grasp that being a success as a boxing promoter is a one in a million shot. What made Farrell think he could succeed where so many others have failed?
“You gotta have 100% belief in yourself, and your vision,” Farrell said laughing. “The reason so many fail is they are not committed, they only see what’s in front of them at that moment in time. From the very beginning I have visualized my promotion to be valued in the billions, even before I knew what I would name it. “I have never doubted my ability as a man to bring the great sport of boxing to every home in Asia. I will bring the great fights people want to see, good 50/50 matchmaking where the fights are important and the titles mean something again.”  But wasn’t this the era of mixed martial arts, which has seemed to get bigger and bigger with countless promotions springing up all over the world? Farrell wasn’t blind to this trend, but, outside of one particular MMA promotion, he’s never been much of a believer that the trend will outlast a historic sport such as boxing.

“UFC, amazing branding and some even greater fights and just very smart people that saw a real opportunity and maximized it,” Farrell said. “Any other MMA promotion is a very poor second place in my opinion.”

“Boxing stands the test of time and is soaked in the blood, sweat and tears of sporting history. It has created greats such as Ali, Foreman, Tyson, Shavers, Marciano, the list goes on and on. Even after they have long finished boxing their names are shouted and the days of their glory are brought back to life through conversations or old films of their fights… heroes who didn’t know how to quit, who sacrificed everything sometimes for no reward at all, but yet inspired us all. There are so many strengths in boxing. I ask you, how many heroes of MMA have the same appeal as Ali, Foreman or Frazier? In fact, are they even called heroes or worthy of that label?”

With five successful promotions already under his belt, Farrell knows his journey to boxing greatness in Asia and the world is just beginning. But he likes what he’s seen so far.
“We are already a global broadcast and I haven’t even really started yet. Just watch out in 2019, as this is where I will make my mark.” Where others might blink, Farrell intends to stare down the tempest that is big time boxing promoting and emerge a winner. Where some may waiver and fold, he will stay the course to see his hand raised in glory. It’s all because of his love for boxing, a sport that had become a part of his DNA since the day of his birth.
“In my life, more than once, I have lost everything,” Farrell said. “I’m not perfect and yet I try improve on who I am every day as I walk this earth. The only thing in my whole life that has never left me, or have I lost, is my love for boxing and its love for me in return.”

Founded in 2016, Ringstar Boxing is Asia’s number one media boxing sports property with a broadcast footprint of over one billion potential viewers in over 60 countries.

Ringstar boxing features highly acclaimed boxers from around the world. The company’s mission is to promote and foster sportsmanship between fighters, position Ringstar as a leading boxing sports media property.

Since incorporation, Ringstar Boxing from launch has now reached a global audience. This has been achieved through a combination of the vision and the genuine matchmaking skills of the company’s Founder and CEO, Scott Patrick Farrell.
“As CEO the most important assets of this business are my team, fighters, shareholders and the fans, they are the people I want to see rewarded every time we promote a show “
Scott Patrick Farrell CEO & Founder Ringstar Management Pte Ltd.
Posted by Boy Raket at 8:00 AM