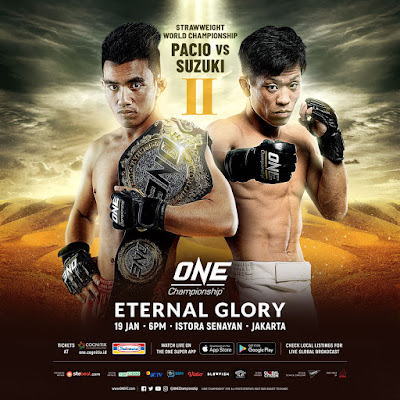 The largest global sports media property in Asian history, ONE Championship™ (ONE), has just announced the main event of ONE: ETERNAL GLORY, set for Istora Senayan in Jakarta on 19 January. Reigning ONE Strawweight World Champion Joshua “The Passion” Pacio of the Philippines is ready to defend his title against Hayato Suzuki of Japan in a highly-anticipated rematch.

Ticket information for ONE: ETERNAL GLORY is available at www.onefc.com.

Joshua “The Passion” Pacio, who hails from Baguio City, Philippines, captured the ONE Strawweight World Championship with a unanimous decision victory over former titleholder Yoshitaka Naito at ONE: CONQUEST OF HEROES last September. It was an epic rematch between the two warriors, as Pacio put together the performance of a lifetime to claim the prestigious title.

The 22-year-old Filipino has shown tremendous improvement over the past few years leading up to his title reign. With the ONE Strawweight World Championship firmly in his grasp, he looks to make a successful first defense against the last man to defeat him.

Hayato Suzuki, who hails from Takahagi City, Japan, first met Pacio in his promotional debut at ONE: KINGS & CONQUERORS in August 2017. The 32-year-old scored a shocking first-round submission victory, forcing the Filipino to tap out via rear-naked choke. Since then, the Japanese grappler has been on a tear, winning his last three bouts with the same submission hold.

An experienced grappler, Suzuki looks to replicate that stellar performance against Pacio and will attempt to claim the ONE Strawweight World Championship at ONE: ETERNAL GLORY on 19 January.
For more updates on ONE Championship, please visit www.onefc.com, follow us on Twitter and Instagram @ONEChampionship, and like us on Facebook at https://www.facebook.com/ONEChampionship.

About ONE Championship™ONE Championship (ONE) is the largest global sports media property in Asian history, and the largest producer of millennial live sports content in Asia. Headquartered in Singapore, ONE is the Home of Martial Arts, and is the world's largest martial arts organization, hosting bouts across all styles of martial arts such as Muay Thai, Kickboxing, Karate, Kung Fu, Silat, Sanda, Lethwei, Mixed Martial Arts, Tae Kwon Do, Submission Grappling, and more. ONE hosts the biggest sports entertainment events across Asia, featuring some of the world's best martial artists and world champions on the largest global media broadcast in Asia. ONE eSports, a subsidiary of ONE Championship, runs Asia's largest eSports league with some of the biggest blockbuster titles in the world. In addition to its digital platforms, ONE Championship broadcasts to over 1.7 billion potential viewers across 138 countries with some of the largest global broadcasters, including Fox Sports, ABS-CBN, Astro, ClaroSports, Bandsports, Startimes, Premier Sports, Thairath TV, Skynet, Mediacorp, OSN, and more.
Posted by Boy Raket at 3:00 PM