More Meaningful the Second Time Around. THE KUNDIMAN PARTY at the PETA THEATER Center 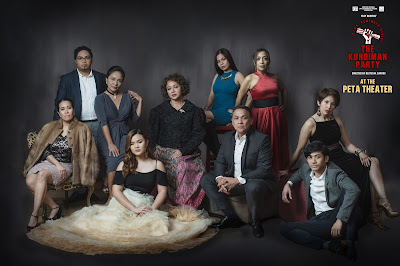 Acclaimed as one the most meaningful and relevant original Filipino plays in recent times, Floy Quintos’ “THE KUNDIMAN PARTY” comes to the PETA THEATER CENTER for limited run starting May 24.

The play, directed by Dexter M. Santos was first produced by the UP Playwright’s Theater in 2018.  It was hailed by critics and audiences alike for the seamless weaving of our  timeless Kundiman art songs into a plot that involved discontented millennials and Social Media, EJKs and other current political and social  issues.

Equally notable were the performances of the fine ensemble led by Shamaine Centenera-Buencamino as Maestra Adela, a reclusive voice teacher whose latent nationalism is awakened . Together with Frances Makil-Ignacio, Stella Cañete-Mendoza, Jenny Jamora and Missy Maramara as Adela’s close circle of Titas, the cast painted a portrait of contemporary Pinoy society that was both poignant as well as wildly entertaining.

By the time the revival opens at the PETA Theater this year, a crucial national election will have taken place, an election that for many will determine the course of the current national struggle.


Whatever the results of this political exercise, the creators of the show believe this: That the outcome of the elections will be the start of a greater struggle, the beginning  of a new chapter in the fight to regain our national dignity. Thus, “The Kundiman Party” and all that it stands for will be more relevant than ever.

It seems most meaningful that “The Kundiman Party” is being  revived at the PETA Theater Center in Quezon City. PETA has long served as a vital venue for meaningful and relevant original Filipino works. “The Kundiman Party” cast and creators are thankful to have been offered the chance to collaborate with this dynamic institution of Philippine Theater.
Posted by Boy Raket at 2:00 PM