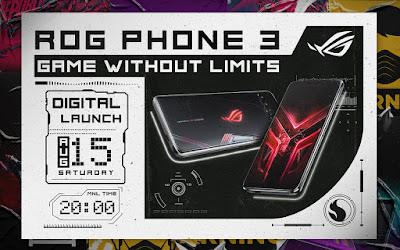 PASIG CITY, Philippines (July 23, 2020) — After ASUS Republic of Gamers (ROG) announced the new ROG Phone 3 series globally, ASUS ROG Philippines officially announces the launching of the much sought-after phone on August 15, 8:00PM. Official pricing, promos, as well as specifications and accessories will be revealed by then.

The distinctive ROG Phone 3 design retains the core gamer-centric benefits of its predecessors, including the unique side-mounted charging port and a monster 6000 mAh battery. The intuitive AirTrigger 3 system now includes a motion sensor in addition to the programmable ultrasonic touch sensors, giving gamers even more ways to control the action. The X Mode performance-optimization software now supports adjustment of multiple system parameters, making it easier than ever to unlock the full power of ROG Phone 3.

The lineup also includes the exciting new ROG Phone 3 Strix Edition, which has the same incredible gamer-centric features as ROG Phone 3. It's powered by the Snapdragon 865 Mobile Platform with a 256 GB UFS 3.1 ROM and 8 GB of LPDDR5 RAM.

With up to 16 GB of the latest LPDDR5 RAM and up to an ultrafast 512 GB UFS 3.1 ROM, ROG Phone 3 delivers the ultimate in overall performance, so gamers can enjoy a super-smooth gaming experience with absolutely no limitations or compromises.

The enhanced X Mode performance-optimization software now allows customization of different system parameters to suit any gaming or using scenario. In conjunction with carefully calibrated defaults for optimum performance, it's easier than ever for serious gamers to unlock the full power of ROG Phone 3.

The upgraded GameCool 3 cooling system has a redesigned 3D vapor chamber, a large graphite film behind the screen to maximize heat transfer, and an enlarged heat sink that's precisely located to eliminate hotspots. The new cooling system is one of the most effective thermal solutions available on a mobile device, and can remove and dissipate the heat generated during full-speed operation via specially designed vents in the back cover. This allows ROG Phone 3 to easily sustain peak performance during heavy gaming sessions, eliminating throttling to give gamers an expert edge against the competition. For extra cooling during marathon gaming sessions, the new AeroActive Cooler 3 clip-on external fan accessory has been completely redesigned to deliver increased airflow to the hotspots on the casing to lower an astounding amount of heat for greater and longer performance.

Groundbreaking new ROG HyperFusion technology combined with multi-antenna WiFi and 5G allows simultaneous connections to WiFi and the mobile network, with intelligent redirection to whichever has the best signal. This allows mobile gamers to enjoy the strongest possible signal at all times for uninterrupted connections.

ROG Phone 3 is equipped with a stunning 144 Hz / 1 ms AMOLED 10-bit display. It's combined with an industry-leading 270 Hz touch-sampling rate that dramatically decreases touch latency to an unprecedented 25 ms, delivering the extreme responsiveness needed to sustain a winning streak. To ensure that visuals on ROG Phone 3 look just like the developer intended, each display is carefully color-calibrated to ensure a Delta-E color accuracy of less than one — making it one of the most color-accurate displays available on a smartphone. There's also HDR10+ high-dynamic range support for enhanced visual realism. To minimize eye strain while delivering impeccable visuals, ROG Phone 3 passes TÜV Rheinland Low Blue Light (Hardware Solution) and Flicker Reduced certifications.

The monster 6000 mAh battery in ROG Phone 3 has stamina that can be relied on for even the longest battles. There are multiple passive power-saving mechanisms, including an exclusive hibernate function that can proactively limit background data and power usage in selected apps. These mechanisms significantly prolong the time between charges and also increase battery lifespan.

Built for gamers, by gamers

Fully immersive gaming with total control is the design goal of ROG Phone 3, which retains the pioneering landscape-oriented ergonomic design of its predecessors.

Upgraded AirTrigger 3 technology provides extra-precise ultrasonic touch controls along the edges of the phone. The gesture capabilities of the AirTrigger 3 side sensors have been further enhanced, including a newly added swipe gesture and dual-partition button emulation, giving gamers a console-level gaming experience. There's also a brand-new motion sensor that adds another gesture to the armory, allowing gamers to control the action by shaking the device: it's a whole new way to interact with the device. AirTrigger 3 gives gamers the very best controls available on a gaming smartphone, and sets the ultimate bar for the competition.

The unique side-mounted USB-C® charging port lets users keep their battery topped up without cramping their style while gaming. The port also connects accessories such as the AeroActive Cooler 3, which features a pass-through USB-C connector, a 3.5mm audio jack, and a new kickstand on the back to support ROG Phone 3 on a desk or table for a better viewing and gaming experience.

ROG Phone 3 introduces ROG Connect, a new online social community — built into the Armoury Crate app — that allows ROG Phone 3 owners to join and play with friends or squads, or even wow the crowd with their uploaded genius gameplay footage and screenshots. ROG Phone 3 gives gamers the very best sharing and community experience.

The unrivaled range of modular accessories for ROG Phone 3 includes the new modular ROG Kunai 3 Gamepad which adds physical console-like gamepad controls to ROG Phone 3; the new ROG Lighting Armor Case for a stunning appearance; and ROG Clip to attach the phone to selected console controllers for the ultimate mobile gaming experience. ROG Phone 3 can also be expanded to provide true 144 Hz dual-screen gameplay with the new TwinView Dock 3, and the Mobile Desktop Dock allows gamers to connect a desktop keyboard and mouse for a desktop-like gaming experience on an external TV or monitor.

ROG Phone 3 is also proudly partnering with Stadia and Unity to establish a truly integrated gaming ecosystem. Together, the partnership aims to build a more complete mobile gaming experience for today’s gamers by providing their favorite gaming content on the go.

The ROG Phone 3 will be launched this August 15, 2020 at 8:00PM. Stay tuned to the ASUS ROG local social media pages for more updates on the event.