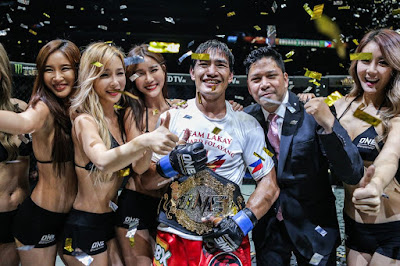 With just a few weeks away until ONE Championship resumes its flagship event schedule, conversations regarding potential bouts have begun to open up. Fans in Asia are craving martial arts action.

The live sports industry was among those greatly and directly impacted by the Covid-19 global situation. With major leagues like NBA basketball soon reopening events, martial arts in Asia is ready to follow suit.

Just a couple of weeks ago, reigning ONE Lightweight World Champion Christian “The Warrior” Lee talked about the possibility of facing American legend Eddie Alvarez and ONE Featherweight World Champion Martin Nguyen upon his return. Another potential name he brought up was former lightweight titleholder Eduard “Landslide” Folayang of the Philippines.

Folayang, it seems, took interest in the 22-year-old champion’s comments and contemplated a future showdown between the two.

“If it happens, it would be my honor. Christian [Lee] is a solid martial arts athlete. I have a lot of respect for that young man,” said Folayang.

“He has great skills and can mix it up pretty good. He has a good ground game, with explosive wrestling and a lot of crazy submissions. And his striking is decent. I would love to test him in all areas of the game.”

Folayang is the 2-time former ONE Lightweight World Champion, and at the age of 36, is nearly 15 years Lee’s senior. The Filipino icon has seen it all inside the ONE Circle, having faced the biggest names in the sport over the last 13 years. Although he’s dropped three of his last four bouts, Folayang still remains considered among the very top in his division.

In contrast, Lee has just been competing for five years as a professional. At 22, he’s the youngest male mixed martial arts world champion in history.

Folayang doesn’t believe age or experience has much to do with being a champion. For the Filipino veteran, it’s all about skill, willpower, and heart.

Nevertheless, there are areas Folayang would like to bring Lee into, should they face each other in the Circle soon.

“He’s a terrific finisher and very fast and powerful, especially with his takedowns. He’s got great athleticism, which allows him to overwhelm most of his opponents, and he has a lot of finishes. I’m not sure how confident he is with his striking though, so that’s something specific I want to test out,” said Folayang.

“I was really impressed with how Christian handled Dagi [Saygid Guseyn Arslanaliev] in his last bout. A lot of people were quick to write him off, but he went in there with a good game plan and executed. I think that came as a surprise to most. But you can’t really underestimate anyone in this game, especially at this level.”

Folayang and his band of brothers at the famed Team Lakay are back in training at their main gym in La Trinidad, Benguet. While none of them have confirmed bouts lined up at the moment, fans are expecting ONE Championship to begin announcing upcoming bouts soon.

As such, “Landslide”, along with other prominent Team Lakay athletes, are staying ready as best as they can and waiting patiently for a call.

ONE Championship returns on Friday, 31 July, with ONE: NO SURRENDER. The main event features ONE Flyweight Muay Thai World Champion Rodtang “The Iron Man” Jitmuangnon defending his title against the phenom, Petchdam “The Baby Shark” Petchyindee Academy.

ONE recently announced the resumption of its flagship event schedule, as well as the addition of new strategic partners in 2020. Among the partners include Petron, the largest oil refining and marketing company in the Philippines, which will be working with Brand Ambassadors, Brandon Vera and Joshua Pacio. The organization also announced partnerships with Unilever brands Axe, Master and Clear, which will be working with ONE Esports.