Lina Transfers to UP, Applies for VAAS Program 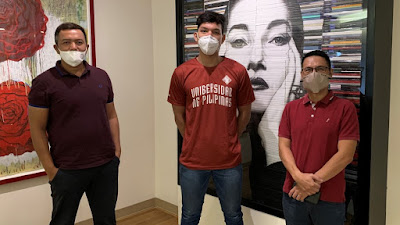 Former Gilas Pilipinas Youth stalwart Bismarck Lina is working on his transfer to University of the Philippines (UP) from University of Santo Tomas (UST), Fighting Maroons head coach Bo Perasol confirmed.“[Bismarck Lina] is already processing his transfer from UST to UP. He’s just working on some papers and documents to complete his transfer,” Perasol said. Despite coming out of high school, Lina, who was part of the UAAP season 81 juniors mythical team, will only see his first action with the Fighting Maroons in UAAP Season 84. “Bismarck will also be applying for the varsity program for [UAAP] Season 84. He won’t be eligible for Season 83 since he has to be enrolled for at least two semesters in UP, but the first semester has already started so he has to wait until Season 84.” The 6-foot-4 Lina, who tallied a double-double average of 16.6 points and 10.9 rebounds in his last season with the Tiger Cubs, will boost the Fighting Maroons frontcourt come UAAP season 84. “We are very happy to welcome him to the team and we look forward to working and playing with him. Bismarck is a young man with a great fighting attitude and huge potential. For me, the one-year wait will be beneficial for him and for the team because we will have enough time to get to know each other and learn together,” Perasol said. Lina will join fellow Tiger CJ Cansino and former Gilas Pilipinas U19 teammates Carl Tamayo, Gerry Abadiano, RC Calimag, and James Spencer in UP. For Lina, it was a well-thought out and hard decision to leave UST. “It is really hard on my part to leave UST. But all I can say is that I’m really thankful to the UP Fighting Maroons for giving me another home. I can’t wait to work and compete alongside them.”
Posted by Boy Raket at 7:30 PM