Denice Zamboanga Ready for Angela Lee After Win in Bangkok 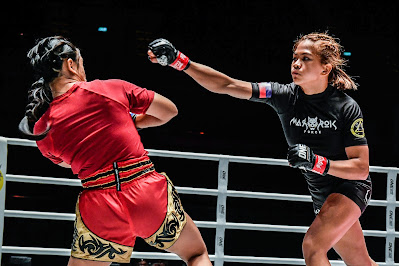 It was a quick and flawless victory for 23-year-old top Filipina atomweight Denice “The Menace” Zamboanga.The undefeated top contender put together an inspiring performance, finishing opponent “Dream Girl” Watsapinya Kaewkhong of Thailand just a little over a minute into the first round of their clash at ONE: A NEW BREED last Friday, 28 August.After establishing her dominance in the striking exchanges early, Zamboanga snatched a quick takedown, and then secured side control. From there, she worked on cranking out an Americana, and the tap came shortly after.Looking back on her performance, Zamboanga gave a little bit of credit to her game but overmatched opponent. Ultimately, “The Menace” explained that she felt she had no choice but to win this bout, to keep her dream of facing reigning ONE Women’s Atomweight World Champion Angela Lee alive.“She (Watsapinya) had good control, but I think I was just able to overpower her. Of course, I couldn’t afford to lose that fight. My goal was to get the win and nothing else,” said Zamboanga.“I didn’t expect to submit her so easily, by Americana no less. I wanted to strike with her, that’s what I was planning to do. But the submission was there, so I took the chance and I got the win. That’s the important thing.”Zamboanga is the number one contender for Lee’s atomweight belt. Following impressive victories over top-rated opponent Jihin “Shadow Cat” Radzuan and former ONE World Title challenger Mei “V.V” Yamaguchi, the 23-year-old effectively earned a shot at the division’s queen.Due to Covid-19 restrictions, however, with increased security between national borders, it has proven difficult to put together events in Asia. Zamboanga was left with no other options but to take somewhat of a tune-up fight in preparation for Lee, which she wouldn’t mind doing again if the opportunity presents itself. 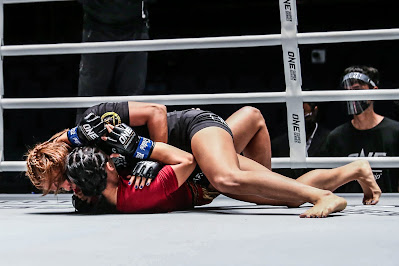 “Once the world goes back to normal, I think I’m ready to face Angela. She’s my idol. But if the situation stays like this for some time, and if ONE Championship is giving me the chance to fight again, then I’ll take another fight,” said Zamboanga.Earlier on the card, Zamboanga’s older brother Drex made his ONE Championship debut a successful one, submitting Thailand’s Detchadin “Detchpool” Sornsirisuphathin in round two.Denice kept a close eye on the contest throughout, watching from backstage.“To be honest, I was more on edge watching my brother fight more than I was nervous for mine. That was his ONE Championship debut, so he really needed to win. I’m glad we were both able to win. This night was a milestone in our careers,” Zamboanga concluded.Zamboanga currently remains in Bangkok to continue riding out Covid-19. She hopes to return home to Manila before the year ends.
Posted by Boy Raket at 4:00 PM