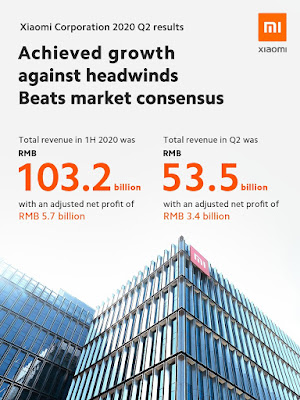 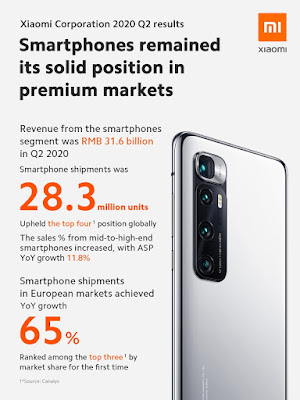 Xiaomi Corporation said, “In the first half of 2020, despite the impact of COVID-19 and great global uncertainties, Xiaomi’s diversified business ecosystem has demonstrated its resilience, as both revenue and adjusted profits beat market consensus, while our operations continued to expand. We made the Fortune Global 500 list for the second time, ranking 422nd, up 46 places from last year. With 2020 being Xiaomi’s 10th anniversary, we have upgraded our core strategy to ‘Smartphone X AIoT’, with AIoT revolving around our core smartphone business, enabling us to lead the future way of smart living. Looking forward to the next decade, we will firmly adhere to our ‘three guiding principles’ - never cease to explore and innovate, continue to offer products with strong price-to-performance ratio, and seek to make the coolest products, so as to let everyone in the world enjoy a better life.” 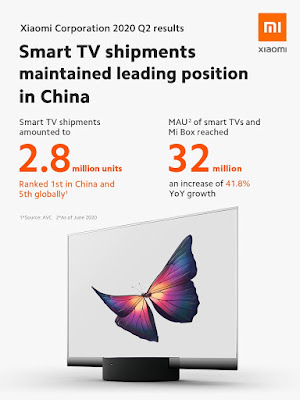 Firmly Adhere to the “Three Guiding Principles” and Maintain Xiaomi’s Position in Premium Smartphone Market Amid the challenges brought by COVID-19 on the global smartphone market, Xiaomi adhered to three guiding principles – “never cease to explore and innovate, continue to offer products with the price-to-performance ratio”. Revenue from the smartphones segment was RMB61.952 billion and RMB31.628 billion in the first half and second quarter of 2020 respectively, and the smartphone shipments reached 28.3 million units.According to Canalys, in the second quarter of 2020, Xiaomi ranked 4th globally in terms of smartphone shipments, and its market share stood at 10.1%. In overseas markets, shipments of its premium smartphones, with retail price of €300 or more, went up by 99.2% YoY in the second quarter of 2020. Driven by the higher proportion of sales from mid- to high-end smartphones, the average selling price (“ASP”) of the Group’s smartphones increased by 11.8% YoY and 7.5% QoQ.The Group insisted on implementing the dual-brand strategy and yielded significant results. Xiaomi’s 5G flagship smartphones, Mi 10 and Mi 10 Pro, were launched in February 2020, the shipments have exceeded one million units within only two months. In August 2020, Xiaomi launched the Mi 10 Ultra, which achieved a DXOMARK score of 130 for overall camera performance, once again ranking 1st globally at the time of launch. The sales have exceeded RMB400 million after 10 minutes of its debut.The Redmi brand continued to make 5G technology accessible to the mass market. In June 2020, the Group launched the Redmi 9A series which priced from only RMB499. It then launched the Redmi K30 Ultra in August, sporting all-around premium features with prices starting from only RMB1,999.It is worth mentioning that Xiaomi also launched its smart factory recently with a total investment amount of RMB600 million, opening up an era of smart and manufacturing at Xiaomi’s factories. The Mi 10 Ultra is the first mass-produced ultra-high-end model of the Xiaomi Smart Factory. 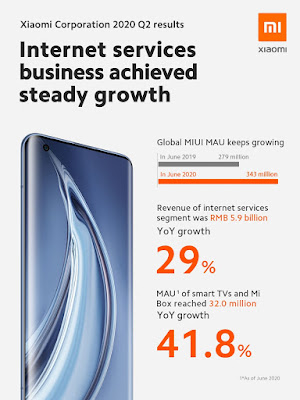 Upgraded Core Strategy of “Smartphone X AIoT” to Build a Smart Life
Revenue from the IoT and lifestyle products segment was RMB28.237 billion and RMB15.253 billion in the first half and second quarter of 2020, respectively. Xiaomi’s global TV shipments still amounted to 2.8 million units, achieving YoY growth despite a decline in the overall TV market. According to All View Cloud (“AVC”), in the second quarter of 2020, the Group’s TV shipments in mainland China ranked 1st for the 6th consecutive quarter and ranked among the top five globally.In the second quarter, Xiaomi introduced two flagship products under the new Mi TV Master Series, further expanding its footprint in the premium market. In July 2020, the Group introduced its first OLED TV, Mi TV Lux 65” OLED. In August 2020, it launched the second ultra high-end TV within the Mi TV Master Series-Mi TV LUX Transparent Edition, which is the world’s first mass-produced transparent TV.To fulfill the various demands of the consumer worldwide, Xiaomi’s smart TVs entered more markets, including Poland, France and Italy during the second quarter. In July 2020, Xiaomi held its first global Xiaomi Ecosystem Product Launch and released a series of new products, including the Mi Smart Band 5 and Mi True Wireless Earphones 2 Basic.Recently, Xiaomi Founder, Chairman and CEO Mr. Lei Jun distributed a letter to employee, announcing that Xiaomi’s core strategy will be upgraded to “Smartphone x AIoT” in the next decade to drive synergistic benefits, with smartphone remains as the cornerstone to the Group’s business, while AIoT will build a smart life around smartphones to let Xiaomi truly lead the future way of smart livingAs of June 30, 2020, the number of connected IoT devices (excluding smartphones and laptops) on Xiaomi’s IoT platform reached approximately 271.0 million units, representing a YoY increase of 38.3%. The number of users who have five or more devices connected to Xiaomi’s IoT platform (excluding smartphones and laptops) increased to over 5.1 million, representing a YoY growth of 63.9%. Meanwhile, the Mi Home App had 40.8 million MAU, representing a YoY increase of 34.1%, in which non-Xiaomi smartphone users accounted for 67.9%. In June 2020, our AI Assistant (“小愛同學”) had 78.4 million MAU, an increase of 57.1% YoY.Xiaomi continued to strengthen the interconnectivity across products with the “Xiaomi Share” initiative. “Xiaomi Share” supports always-on access to music, video and voice calls when switching across multiple devices. In addition, the Group developed the multi-screen collaboration function, which support cross-device photographing and document editing. Going forward, the Group will continue to enhance the connectivity between smart devices, and offer more intelligent user experiences and application scenarios, thereby bringing global Xiaomi users to the forefront of future smart living. 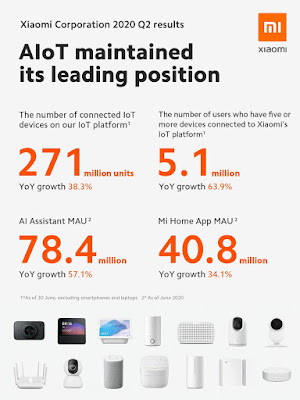 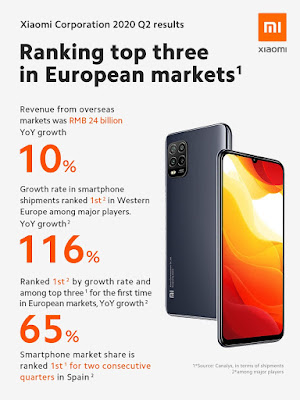 Impact of the COVID-19 outbreak
In the second quarter of 2020, the COVID-19 pandemic affected Xiaomi’s global operations to varying degrees. In April and May 2020, several of the Group’s key markets implemented strict lockdown measures and the sales were greatly impacted. As business restrictions were gradually lifted, sales have recovered tangibly.In India, strict lockdown measures were imposed starting in late March and our sales were significantly impacted during the lockdown period. As India gradually lifted the restrictions during the second quarter of 2020, consumer demand started to rebound. In July 2020, the average daily number of smartphone activations in India returned to 72% of the pre-pandemic level recorded in January. In July 2020, excluding India, the average daily number of overseas smartphone activations had reached 120% of the pre-pandemic level recorded in January.About Xiaomi CorporationXiaomi Corporation was founded in April 2010 and listed on the Main Board of the Hong Kong Stock Exchange on July 9, 2018 (1810.HK). Xiaomi is an internet company with smartphones and smart hardware connected by an Internet of Things (IoT) platform at its core.With an equal emphasis on innovation and quality, Xiaomi continuously pursues high-quality user experience and operational efficiency. The company relentlessly builds amazing products with honest prices to let everyone in the world enjoy a better life through innovative technology.Xiaomi is currently the world’s fourth-largest smartphone brand, and has established the world’s leading consumer IoT platform, with 271 million smart devices connected to its platform, excluding smartphones and laptops. Xiaomi products are present in more than 90 markets around the world.In August 2020, the company made the Fortune Global 500 list for the second time, ranking 422nd, up 46 places compared to last year. It also ranked 7th among internet companies on the list. In May 2020, the company made the Forbes Global 2000 List again, and its ranking jumped to 384th.Xiaomi is a constituent of the Hang Seng Index, Hang Seng China Enterprises Index and Hang Seng TECH Index.For more information about the company, please visit https://blog.mi.com/en/.
Posted by Boy Raket at 12:30 PM