ASHE SHARES NEW TRACK AND MUSIC VIDEO “ME WITHOUT YOU” 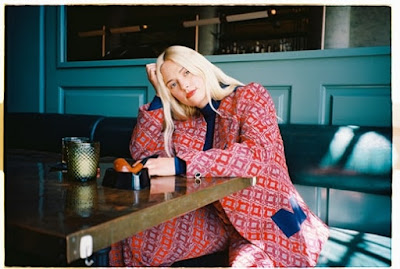 Ashe has shared “Me Without You,” the latest new track to be revealed from her forthcoming anticipated debut album Ashlyn, out May 7th on Mom + Pop Music. Stream/download it HERE and watch the striking new music video HERE.  “Me Without You” was co-written by: Ashe, Leroy “Big Taste” Clampitt (Justin Bieber, Lennon Stella) and Casey Smith, who also collaborated with Ashe on her monster hit “Moral of the Story” which has amassed 758 million streams to date.

“Me Without You” is a Beatles-esque piece of baroque pop that unfolds as an anthem of self-discovery, backing Ashe’s rhapsodic vocal work with lavish string orchestration.   Flashes of classic Beach Boys influences can be heard in Ashe’s angelic layered vocals. The song is an empowering anthem displaying Ashe’s growth and evolution both artistically and personally.

Ashe explains, “’Me Without You’ is my follow up to ‘Moral Of The Story.’ It's saying you thought that I needed you to be who I am. There is my past relationship...I had multiple people... You know, assumed that I needed them in my life to feel confident or to be me and "Me Without You" is just this record that's like, ‘Ooh, I am so good on my own.’”

The colorful music video was directed by Jason Lester (LAUV & Conan Gray, Sabrina Carpenter) with creative direction by Ashe. The clip sees Ashe in a speakeasy-style bar, dancing barefoot on broken glass and leaving behind traces of blood seemingly unfazed.  Throughout the clip she’s flounced by a quartet of string players miming as Ashe drifts in and out of various scenes.  Thematically the video conveys the underlying message that no matter where you go, you carry your past and memories with you.

Additional notable tracks revealed from Ashe’s forthcoming new album include "When I'm Older,"  "I'm Fine," and “Till Forever Falls Apart,” Ashe’s acclaimed collaboration with FINNEAS which has amassed 40 million streams since its March release. Ashlyn also features both versions of “Moral of the Story” including the most recent reimagined collaboration with Niall Horan. Pre-order the album HERE and watch the album trailer HERE.

2021 is proving to be an exciting year for Ashe.   She was just named a YouTube Music Artist on the Rise, YouTube’s emerging artist program that champions breaking talent and rising stars. Ashe is also nominated for iHeart Music Awards Best New Rock/Alternative Rock Artist 2021 (the awards are on May 27th).  Her meteoric rise includes amassing a million Instagram followers, over 9.5 million monthly Spotify listeners and one million TikTok followers and earning the admiration of legendary artists like Brian Wilson (one of Ashe’s personal heroes).  A graduate from the prestigious Berklee College of Music, Ashe’s touring resume includes performances at Coachella with Big Gigantic, and opening slots for Lewis Capaldi, The Chainsmokers, LAUV and more.