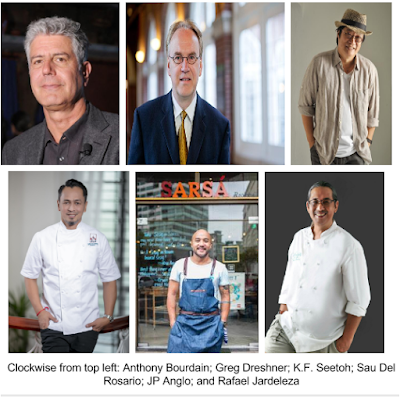 Leading the roster of dialogue speakers are Anthony Bourdain, international food and travel celebrity, and Greg Drescher who is currently the vice-president of strategic initiatives and industry leadership at The Culinary Institute of America (CIA). Joining him are our country’s very own culinary maven, Claude Tayag, who specializes in Kapampangan dishes and owns the famous Bale Datung as well as Sau Del Rosario who is a proud owner of the popular modern Kapampangan café, Café Fleur and 25 Seeds, SARSA’s JP Anglo, and Rafael Jardeleza who is the founder of project director of the annual Tabu-an Western Visayas Ilonggo Heritage Cooking Competition and Food Fair.

Also included in the list of speakers are Mai Pham, author of several award-winning cookbooks including The Best of Vietnamese & Thai Cooking, Pleasures of the Vietnamese Table and Flavours of Asia and, Malcolm Lee who is the head chef and owner of the first Michelin-starred Peranakan restaurant, Candlenut, to name a few.

Curated by K.F. Seetoh and organized by Makansutra and presented by the Department of Tourism (DOT) and the Tourism Promotions Board (TPB), this year’s WSFC17 is bigger and better with over 50 kinds of street food representing 13 different countries in over 30 stalls plus pop-up booths.