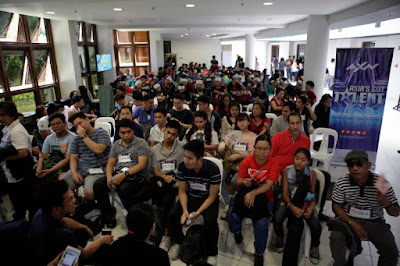 The most creative and aspiring Pinoy acts turned out in full force today as AXN kicked off its open auditions for the second season of Asia’s Got Talent.

Thousands of talented performers – from magicians, singers and acrobats to dancers and variety acts – headed to QCX: Quezon City Experience to audition for a coveted spot in the record-breaking talent contest and a USD100,000 cash prize. 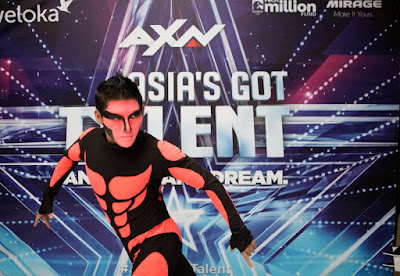 “Asia’s Got Talent celebrates performers of any age and with any dream and that was certainly the case here in Philippines today. Our first season was won by the Filipino shadow dance group, El Gamma Penumbra, and this has inspired the entire nation to pursue their dreams. I wish all performers who auditioned for Asia’s Got Talent today the very best of luck and I hope to see them shine on Asia’s Got Talent later this year,” Virginia Lim, Senior Vice President and Head of Content, Production and Marketing, Sony Pictures Television Networks, Asia.

Billed as the world’s greatest talent competition, “Asia’s Got Talent” welcomed individual and group performers of all ages, who took to the stage with dreams of making it to the next round.
The auditions started at 10:30am this morning with the day’s acts showcasing their amazing skills in front of the show’s executive producers. Due to the overwhelming response, the dazzling display of Pinoy talent did not end until well into the evening.

Some of the most incredible performances during the auditions included a haka dance group, fire dancers, a 9-month pregnant singer and harpist, a diablo (Chinese yoyo) performer, a differently-abled duo, a beatboxer, as well as numerous vocalists and dancers, some of which started queuing as early as 3am.

The Philippines is highly regarded as the act to beat for having won the first season with the breathtaking performance of El Gamma Penumbra, a Filipino shadow play dance group which took home the grand prize of USD 100,000.

In addition to Manila and the recent auditions in Singapore and Kuala Lumpur, open auditions will also be held in Taipei (May 27) and Bangkok (May 28). To apply online, interested participants may log on to www.axn-asia.com/AsiasGotTalent for more details.
Asia’s Got Talent is slated to premiere in the second half of 2017, first and exclusively on AXN.
Join the conversation:
@AXNAsia / @AsiasGotTalent / #AXNAsia / #AsiasGotTalent / #AsiasGotTalentAudition
___
New Ratings Records in Asia
Season one of Asia’s Got Talent set new ratings records for the English general entertainment (GE) genre during its run, taking AXN to the number one spot in its timeslot among all regional pay-TV channels collectively across Southeast Asia and Taiwan.2
In Malaysia, Asia’s Got Talent was the highest rated entertainment series on English language channels on Astro in the past two years. In the Philippines, the Grand Final Results episode of Asia’s Got Talent was the highest rated pay-TV program in the country since 2008, and commanded a 96 percent share among 22 English GE channels. 3
Got Talent Globally

The Got Talent franchise was created by Simon Cowell’s Syco Entertainment and is co-produced and owned by Syco Entertainment and FremantleMedia. It is entered in the Guinness World Records as the Most Successful Reality Television Format in history with 70 local versions produced across Europe, Asia Pacific, the Middle-East, Africa and the Americas. Around the world, the Got Talent format airs in a total of 186 countries.


About AXN
AXN is Asia’s leading general entertainment channel featuring exclusive top-rated drama series, blockbuster features, reality programs and ground-breaking original productions. The channel appeals to a discerning audience seeking content that is smart, intriguing and unexpected, all delivered close to U.S telecasts. From The Blacklist and Quantico, to MacGyver and The Amazing Race Asia, AXN is defined not by a genre, but by an attitude that truly redefines action.
Launched first in Asia in 1997, AXN is a global channel brand with a presence in Latin America, Africa and Europe. In Asia, the channel is enjoyed in 126 million households across 19 territories and is available in both SD and HD.
AXN Asia is wholly owned by Sony Pictures Entertainment and managed by Sony Pictures Television Networks, Asia, which also operates leading channels including Animax, Sony Channel, ONE and GEM.