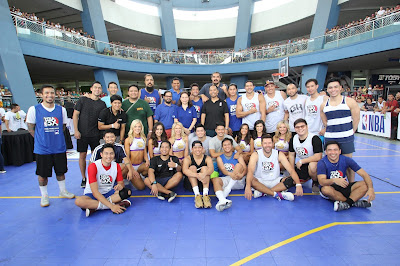 NBA 3X Philippines 2017 presented by AXA reached an all-time high in popularity this year with increased participation from Metro Manila and provincial teams joining the various age group categories of the seven-year old 3-on-3 basketball tournament.

Fifty-six out of 176 participating teams survived the qualifiers held at Don Bosco Makati on July 15-16.  The quarterfinals, semifinals and finals matches of the Boys Under-13, Under-16, and Under-18, Girls Under-18, Men’s Open and Women’s Open were staged at the SM Mall of Asia Music Hall on July 22-23.

New champions were hailed in the avidly watched Men’s Open division that was won by Team Rocan from Valenzuela, Bulacan.  Christian Chua, Mark Fernandez, Elmer de la Cruz, and Philip Torres outhustled Team 459 Legaspi from Colegio San Juan de Letran in a closely fought game.  EGS Elite, four-peat champions of the NBA 3X Philippines Men’s Open division since 2013, was unable to follow through with their plans for a fifth championship after failing to show up in the quarterfinals.

The Women’s Open Division was won by National University (NU)-A with Trixie Antiquiera, Ria Joy Nabalan, Samantha Harada, and Rhena Itesi, besting their teammates on the opposing NU-B squad. Both teams play for the NU women’s basketball team that has dominated UAAP women’s basketball for three consecutive seasons. “It was a challenge to have to face our teammates who are familiar with our style of play, but we are proud to earn this victory,” said Antiquiera.

Among the highlights of the afternoon was the hotly contested match between the Boys Under 16 finals between the Berkeley Aquanauts of Berkeley School Baguio and Makati Basketball.  Intense play coupled with dazzling, athletic play from two former Jr. NBA National Training Camp finalists, Jazzy De Ayre and Ethan Rodelas, mesmerized the mall crowd, eliciting cheers and loud crowd reaction.  Similarly, the Boys Under-13 finals between Berkely School of Baguio and De La Salle Zobel-2 showcased wire-to-wire action from very young ballers playing like big boys, which the crowd enjoyed immensely.

A special division for AXA also freatured the rich basketball culture within the world’s largest and fastest-growing life insurance company in the country.  Eight teams from the field of AXA teams made it to the quarterfinals.  In the end, Team AXA Life-A bested AXA’s Go Elite in a “man’s game”, that gave the crowd a “show of force”.

The Girl’s Under-18 Division title match came down to the girls of Team Bulacan and University of Baguio, where Bulacan relied on Cindi Gonzales’s steadyplay in the paint and deft ball distribution to win the day.  Additionally, Escuela de Sophia dominated the Boys Under-18 division and edged out schoolmates EDSCI by nailing crucial two-pointers that to secure the lead and the victory.

NBA talents Steven Adams of the Oklahoma Thunder, former Sacramento Kings head coach Reggie Theus, also known as Kobe Paras’ coach at Cal State Northridge in the US NCAA, and the Laker Girls awarded all winning individuals and teams their medals and trophies.

The official partners of NBA 3X Philippines 2017 presented by AXA include CloudFone, Globe At Home, Globe Prepaid, Panasonic, with SM Mall of Asia and Spalding serving as Supporting Partners.  Official NBA broadcasters for the event are ABS-CBN Sports and Action, Basketball TV, and NBA Premium TV.

For more information on NBA 3X Philippines 2017 and the registration process, log on to www.nba3x.com/philippines and follow www.facebook.com/nba3xasia.

For more details on AXA Philippines and their product offerings, visit www.axa.com.ph and www.facebook.com/AXA.Philippines.