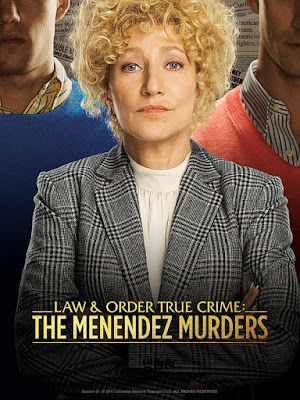 From executive producer Dick Wolf comes the first installment of a series of true crimes that shocked America in the anthology series Law & Order True Crime: The Menendez Murders, which premieres on Sony Channel this September.
The true crime series is an in-depth dramatization of the notorious murder case of brothers Lyle Menendez (Gaston Villanueva) and Erik Menendez (Gus Halper) for the 1989 brutal killing of their parents at their Beverly Hills mansion.
Emmy and Golden Globe winner Edie Falco stars as defense attorney Leslie Abramson, who defended the Menendez brothers in the court case that became a national sensation.
From the players involved to the media hype that ensued, the eight-part series presents in detail the crime and the protracted trials that followed which ended in the 1996 conviction of the infamous brothers on two counts of first degree murder and sentenced to life without the possibility of parole.

Law & Order True Crime: The Menendez Murders premieres on September 27, every Wednesday at 8:50pm, within 12 hours of the U.S. telecast. First & Exclusive on Sony Channel.


About Sony Channel
Sony Channel is the premier destination for female-skewing entertainment with the biggest and best of Hollywood. Designed for the socially connected viewer, Sony Channel features some of the most captivating and talked-about drama, comedy, lifestyle, and reality programs on TV, all airing close to the U.S. telecasts, together with popular feel-good movies.
Fresh, confident and stylish, with a dash of clever wit, Sony Channel is visually stunning with a brand identity that perfectly complements its line-up of high calibre programming. Sony Channel appeals to a female-skewed, male-inclusive audience who loves to escape, engage, and lose themselves in premium content. Viewers are modern, social, stylish, and aspirational.
Sony Channel is wholly owned by Sony Pictures Entertainment and managed by Sony Pictures Television Networks Asia, which also operates pay-TV channels AXN, Animax, ONE and GEM.
See www.SonyChannelAsia.com, and join the conversation on www.facebook.com/SonyChannelPH and https://twitter.com/SonyChannelPH for more.