IBO WORLD CHAMP MICHAEL DASMARINAS LEADS PACK OF FIVE PINOYS WHO WILL SHOW THEIR WARES IN SINGAPORE ON MARCH 29, FOR RINGSTAR BOXING’S “RIDHWAN VS. AMBUNDA II - THE REMATCH” 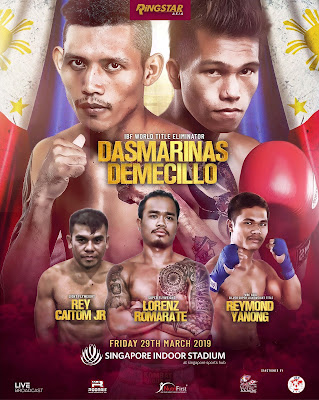 MANILA, PHILIPPINES: Five Filipinos are set to show their wares at Ringstar Boxing’s “Ridhwan Ambunda II - The Rematch,” to be held on March 29, 2019, at the Singapore Indoor Stadium.  Led by IBO World Bantamweight champion Michael “Gloves on Fire” Dasmarinas (28-2-1), whose fight will be the co-main event.  Dasmarinas is set to face fellow Pinoy Kenny “Big Heart” Demecillo (14-4-2), who hails from Cebu City, for an IBF World Title Eleminator fight.  This will also be Michael Dasmarinas’ fourth fight under Ringstar’s banner.

The pride of Camarines Sur, whose gloves were burned when he was 9-years old by a relative, in an attempt to dissuade him from boxing, has come a long way, and has been grabbing headlines in recent months.  More so, when he won the IBO World Bantamweight title belt last April, also in Singapore.

Ringstar’s Founder & CEO Scott Farrell, says, “The world is starting to know that Michael “Gloves on Fire” Dasmarinas does have a lot of power, and a good chin.  As a fighter, Michael has shown that he is vulnerable against a busy fighter.  But that’s the only real hard criticism I have about him.  In the past, he hasn’t been recognised or celebrated as much as the other world champions from the Philippines, and often overlooked.  But now, that he is with Ringstar, this is changing rapidly, and Michael and his fights are receiving global interest.  I truly believe Michael has the talent to go all the way, but he needs to focus more on his craft, and improve another 1000%, if he is truly going to be a world-renowned great fighter.”

As for the upcoming fight, Farrell says, “The first word that springs to mind is: Tough.   This fight for the IBF number one spot, and a chance to face the IBF world champion is going to be one very tough fight, for both Michael and Kenny.  Michael will need to hurt Kenny early in my opinion, or it could be a very painful night for the "Gloves on Fire" power puncher.”

“However, Michael is in this position for a reason. He needs to prove to everyone that he belongs in the top world rankings and that he deserves a shot at the title.  As for Kenny, from what I have researched, he is absolutely brave, relentless, and can take plenty of hard shots.  He has some great combinations, and if he sticks to his game plan and doesn’t get caught,  he could end up winning the fight,” ends Farrell.

Tickets range from $38 - $118 and go on sale February 1, at www.sportshub.com.sg/Ridhwan- Ambunda VIP Ringside Sofa Seats are at $1,888 comes with uninterrupted views of the ring and a personalised butler service with free flow drinks. Early Bird discounts of 30% off all tickets till 28 February 2019 with promo code, ‘Ringstar’ All fights will be broadcast ‘LIVE globally with more details to be announced soon.
Posted by Boy Raket at 12:00 PM