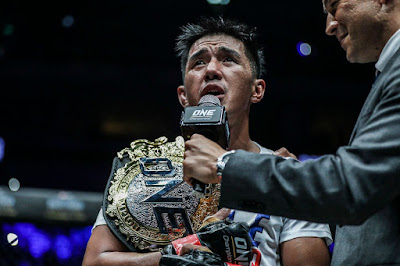 Geje "Gravity" Eustaquio admitted to being careless against Adriano "Mikinho" Moraes following his unanimous decision loss in the main event of ONE: HERO'S ASCENT last Friday, 25 January at the Mall of Asia Arena in Manila, Philippines.
The Baguio City native surrendered the ONE Flyweight World Title in front of his hometown crowd to the Brazilian grappling wizard after five grueling rounds.
"Moraes' bread and butter is his jiu-jitsu. I have to admit there were times when I got careless because I wasn't able to defend a few takedowns," said Eustaquio.
But despite all that Eustaquio still firmly believes he was the rightful winner of the epic trilogy.
"But if you saw the fight, I was the one to score even when he's in the mount position. I throw punches, elbow strikes, my elbow was even in pain from hitting him in the head,” he explained.
"His striking is ok, but I think it's fair to say that my striking is better. That's the way I look at it. The only thing he did was a near submission."
Initially gunning for a finish, there were instances when “Gravity”  managed to stun his foe but what stood out in the match was Moraes’ Suloev Stretch in the fourth round.
That near-submission attempt was what many believe won the match for Moraes, including ONE Championship Chairman and CEO Chatri Sityodtong.
Eustaquio said he would have to thoroughly watch the contest again to come up with an objective assessment, but he respects the judges' scorecards nonetheless.
"Regarding the decision, they're pointing out that I got stuck far too long in a leg lock. In my opinion, of course, I have to study the fight again and learn," Eustaquio stressed.
"But it is what it is. What hurts more is that there were two Filipino judges. But I have to stay positive, and I respect the judges' decision at the end of the day."
To say that the defeat was an affliction would be an understatement, but Team Lakay is willing to go back to the drawing board to once again shoot for their lost World Titles.
"I've been through this before. It's time to get back to the drawing board," said Eustaquio.
"It hurts to smile, but we are people of the mountains and there is no mountain we cannot conquer."
Posted by Boy Raket at 12:00 PM