THE LATEST SEASON OF SURVIVOR ON JACKTV TEST’S THE LIMITS 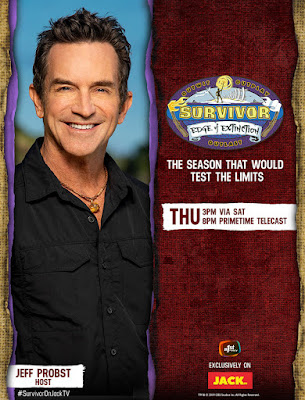 A new twist to this season is the introduction of the island known as “Edge of Extinction,” which severely tests the will of the castaways to be the Sole Survivor and what they are willing to endure to make that happen. Those who can endure the emotionally and physically difficult challenge will be given a shot for one of them to get back in the game and continue their quest to be the ultimate winner.

“Survivor continues to reinvent itself with new energy, and this season we’ve added a new secret game-changing twist” said executive producer and host Emmy Award winner Jeff Probst. “After being voted out, players will be faced with a decision to either go home or go to the ‘Edge of Extinction,’ where they will be pushed further than ever before for a chance to get back in the game.”

These new and returning castaways will be forced to compete against each other with the same ultimate goal: to outwit, outplay and outlast each other, and in the end only one will remain to claim the title of Sole Survivor. The show films in the Mamanuca Islands in Fiji, and is hosted by Jeff Probst.

Survivor: Edge of Extinction airs every Thursday via satellite at 3PM with a prime time telecast at 8PM exclusively on JackTV.

JackTV is a one of a kind channel, showcasing a youthfully characterized and urban cultured TV entertainment that plays as an inspiration to young adults and young at hearts who revel in their individuality and uniqueness. Its target market sees the world as its playground. They express themselves through music, arts, and other creative ways. JackTV wants to harness and associate creativity with its brand by showcasing content that is relevant to this type of market. It is designed to make us feel comfortable, encouraging us to let go of our suspicions and tap into our playful side.
Posted by Boy Raket at 3:30 PM