Top 10 Tips on Winning in PUBG Mobile by Vivo Malaysia 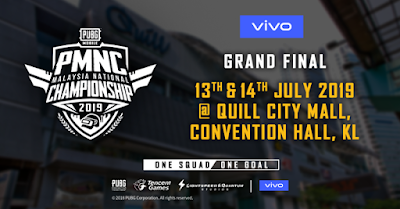 Kuala Lumpur, 10 July 2019 – The PUBG MOBILE Malaysia National Championship (PMNC) Grand Finals will be held at Quill Convention Centre, Jalan Sultan Ismail, Kuala Lumpur from 13 to 14 July 2019 where 12 teams will battle it out for RM114,000 in prize pool.

There are plenty of shoes to be gotten from the crates after you trade in your BP or UCs, but none of them good for your game. Not wearing shoes actually decreases the noise you make when you run or scurry about and the enemy can’t hear you that well. Notice your enemy’s footsteps are so loud, that’s how loud you are when you wear shoes in the game.

Plus not wearing shoes does not affect your running or movement performance, so there’s no downside, just a great advantage.

The Mutant is a rare AR but you can get it at most hot landing zones such as Military Base, Mylta Power, Georgopol and the Prison.

Once in a while you might come across a flare gun in the game, we would urge you to pick it up. When you shoot a flare up, a cargo plane will fly by and drop off some rare supplies like an AWM sniper rifle or a Gilly Suit.

But beware, other players can see the flare too so they’ll be heading to your location to grab the loot. In this case, pick a strategic location near the cargo and take out other players when they arrive one by one.

If you’re playing the squad version where you are randomly setup with three other players, make sure you work together and not go rogue. You need each other to back you up, cover for you when you are searching for loot and outflank the enemy.  If you get shot or knocked out to be exact, your teammates can revive you and vice versa.

Make sure you use a first aid kid or bandage your wound after being revived, don’t worry, plenty of those to be collected throughout the game.

It doesn’t matter, just use a good quality headphone or earphone and it will help you to pinpoint where your enemy is as PUBG does have amazing audio. For instance, if you hear a gunshot to your right ear, the shooter is located to the right. It’s as real as it gets.

PUBG offers an in-game voice chat with your team, with controls to turn off the mic or speaker for voice, or adjust the levels. If you don't want to be distracted by noisy chit-chat, turn it off but team text chat will always be on and non-intrusive.

In our experience, beginners would do well to arm themselves with a shotgun, the S686 double-barrel to be exact, with an AR. The AR/shotgun combo is pretty effective during urban combat scenarios, which is where you will end up one time or another in the game.

The S686 has major stopping power and takes out a player using only Level 1 body armour with one shot. Level 2 easily with 2 shots. Very useful for the final shootout but only if you are up-close with your enemy. Usually in the final shootout, it’s good to have an AR with sniping abilities which brings us to…

Arguably one of the best ARs available in the game, even better than the AKM or M16A in our book. It allows for some of the best performances in close quarter combat scenarios and can be used for sniping over long distance, 600 metres to be exact!

Trust us, that’s more than enough range and causes real damage. Uses 5.56mm bullets just like the M16A or SCAR-L ARs but after testing them all in various scenarios, the M416 wins hands down as one of the best all round AR.

Talking about sniping, you’ll need the 6x or 8x scopes which you’ll search for during gameplay but don’t worry, there’s plenty of them around, in hot zones such as the Military Base, Mylta Power, Georgopol or towns such as Pochinki and Rozhok.

Red Dot or Hologram scopes are everywhere along with angled foregrips (should your gun require it) which, attached to your weapon would decrease recoil and increase it’s performance. Don’t worry about how identify them the mobile version of the game will automatically pick them up and attach them to your weapons during gameplay.

Finally, and this is the most important part of the game, use the right device like the Vivo V15Pro, equipped with a Snapdragon 675 chip paired with a 8GB RAM, which allows the game to run in high settings without any issues. Its AI helps manage the RAM you use during gametime. The more you play, the more it knows to allocate more processing power and memory to your gaming.

Bonus Tip: Learn From The Pros!

Head over to Quill Convention Centre this weekend and see how the pros do it. They are the players in the country taking part in the growing E-Sports industry and you can learn a lot from their slick moves.

We’re quite certain, that with a Vivo V15Pro and applying the tips we shared above, you and your team will be on your way to winning that yummy chicken dinner.

About Vivo
Vivo is a leading global technology company committed to creating trendsetting smart mobile products and services. Vivo is devoted to forming a vibrant mobile internet ecosystem, and currently owns and operates an extensive network of research operations, with R&D centers in the US (San Diego) and China (Dongguan, Shenzhen, Nanjing, Beijing and Hangzhou). These centers focus on the development of cutting-edge consumer technologies including 5G, AI, mobile photography and next-generation smartphone design.
Vivo has over two hundred million users enjoying its mobile products and services around the world. Vivo is present in 18 markets globally and features offline retail stores in over 1,000 cities worldwide.
Posted by Boy Raket at 4:00 PM