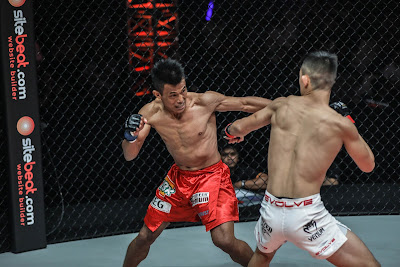 Edward “The Ferocious” Kelly is highly-motivated to face “The Stalker” Xie Bin on August 2 at the Mall of Asia Arena in Manila, Philippines.

Kelly, who will be the first Team Lakay representative to see action at ONE: DAWN OF HEROES, will be competing in the stacked card alongside Eduard Folayang, Honorio Banario, Geje Eustaquio, and Danny Kingad.

Also known as “The Ferocious,” Kelly has mixed emotions sharing the stage with four of his teammates.

“I feel a little pressure for me to do well in my next match,” Kelly said.

“When you are performing on the same night with Eduard, Honorio, Geje, and Danny, I feel the need to do well and win. I also feel inspired because I know that I am not alone and no matter what happens, we will be there for each other.”
The Filipino featherweight contender will return to action against Xie, who himself is riding a six-bout win streak with four victories coming by way of submission. The Baguio City native, who excels in striking, along with the rest of his team has formulated a game plan for his upcoming bout, particularly in dealing with Xie’s grappling.

“I know that I have more experience fighting professionally than him but I am not underestimating his skills in any way. Making his opponents tap may be his strongest point but I believe that his striking is his weakness and that is where I will take the match. I just need to time my strikes accurately and prepare to defend myself from his takedowns.”

As Kelly prepares for his upcoming match, he feels confident knowing that he won’t be the only athlete representing the host country that night. In fact, Kelly says he draws strength from knowing his entire team will be there in his corner, as usual.

“I’m really happy and excited to share the stage with my brothers,” Kelly concluded.

“We have done a lot of things together for the longest time and to compete together in our country is just a huge boost to our morale.”
Posted by Boy Raket at 4:00 PM