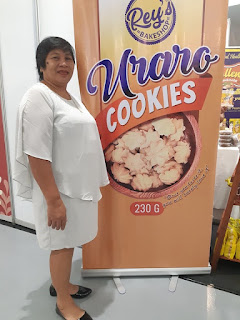 The small island of Marinduque is famously known for its Moriones Festival, an annual Lenten festival observed during the Holy Week. But the beauty of the province’s culture and heritage doesn’t end there. Marinduque is also top of mind when it comes to arrowroot or uraro cookies. But for a small island brimming with ingenious entrepreneurs in this industry, how does one keep afloat?

“Business does not only make you rich but it also makes you strong, innovative, and persevering to leave a legacy that your children can inherit in the future,” inspiring words from Mrs. Felisa Rey, owner of Rey’s Bakeshop in Sta. Cruz, Marinduque.Rey’s Bakeshop formerly known as Josel Rodil’s Bakery was established in 1987 by Mrs. Josefa Rodil. As a Home Economics teacher, Mrs. Rosil used to attend different seminars, especially on food processing until she came up with her version of arrowroot cookies. After her retirement in 1992, the small home-based business moved into a separate bakery shop. Their offer other pastries and bread aside from arrowroot cookies.The business started with two (2) full-time employees: Mrs. Felisa Pedernal-Rey (adopted child of Mrs. Josefa Rodil) and her husband Mr. Rolando Rey who served as the marketing arm and production staff of the business. What started as a simple home business turned into one of the province’s all-time favorites as they offer their cookies around Marinduque. With the couple’s hard work and perseverance, in 2014, Josel Rodil’s Bakery was transferred to Mr. Rey and was then renamed Rey’s Bakeshop. The bakeshop was able to support the needs of their family. It was in 2017 when their daughter Ms. Eunice Rey quit her corporate job abroad and helped them in managing the business.As the industry gets more saturated in time, the daughter, Eunice, decided to join the second batch of the Department of Trade and Industry’s (DTI) Kapatid Mentor Micro-Enterprise (KMME) program in 2018. KMME is a mentorship program designed by DTI as a mini Masters in Business Administration course, offered free for entrepreneurs to level up their businesses. From then on, Rey’s Bakeshop has been included in DTI’s different programs such as the One Town, One Product (OTOP) where they availed free services such as laboratory testing for Nutrition Facts, new label and packaging, Trademark registration with the Intellectual Property Office (IPO) and barcode registration to GS1 Philippines. She also joined local trade fairs such as the Marinduque Expo and MIMAROPA Naturally, among others. She participated as well in different DTI seminars such as SGS Kaagapay sa Negosyo Program, Traceability, eCommerce, and Good Manufacturing Practices and Sanitation Standard Operating Procedure.From a PHP 200 starting capital, its assets increased to PHP 3 Million and its manpower grew with ten (10) full-time and five (5) part-time employees. Its annual sales of PHP 100,000 also increased to PHP 1.5 Million.But as the business was growing, it was in 2019 when the family faced one of, if not, the biggest hurdle in their life with the passing of the late Mr. Rolando Rey. Ms. Eunice took over the business with the supervision of her mother.With DTI’s assistance, Ms. Eunice started to prepare the technical requirements, and the production facility applied for the Food and Drug Administration License to Operate (FDA LTO) and is now waiting for the result.As an answer to the pandemic, Rey’s Bakeshop started selling its products online through different e-Commerce channels. Through the use of social media, Rey’s product reached other provinces such as Laguna, Cavite, and even some parts of Metro Manila. Moreover, the small farmers in their community became the backbone of the business to answer the insufficient supply of raw materials.The transformation of Rey’s Bakeshop is a testament that perseverance, innovation, and being strong-willed run in the culture of Marinduque. And that the transfer of legacy from generation to generation transcends biological family ties.
Posted by Boy Raket at 4:00 PM