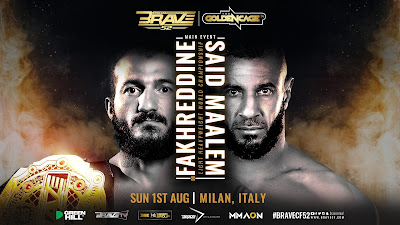 History, arts, and food will forever be associated with the rich culture of Italy. But little did many living outside Europe know that sports in the country has a long tradition.Like in most European nations, football is widely popular in Italy. The national team has won the FIFA World Cup on four different occasions, most recently in 2006.Meanwhile, automobile racing comes in as a close second with many Italian engineers and drivers having contributed much to the said sport.When it comes to combat sports, Italy has produced a handful of notable names such as fencer Edoardo Mangiarotti and professional wrestler Bruno Sammartino.But as far as mixed martial arts (MMA) is concerned, it has not caught on yet. All that could change on August 1st as BRAVE Combat Federation makes its first venture on Italian soil.The Bahrain-headquartered outfit is set to host BRAVE CF 52: Bad Blood in the beautiful city of Milan, featuring a Light Heavyweight World Championship clash between middleweight titleholder Mohammad “The Latest” Fakhreddine and Mohamed “L'Ambiance" Said Maalem.It is a welcome development for The Golden Cage--a local MMA promotion that has been spearheading the sport's rise from obscurity in the country since 2017.It has been an uphill climb for the Italian MMA scene. Despite churning out top-caliber competitors like Marvin Vettori, Alessio Sakara and Alessio Di Chirico, it still does little to prevent many talents from leaving home to find greener pastures as opportunities range from low to none.Ardent to push MMA into greater heights in Italy, The Golden Cage found an ally in BRAVE CF, an organization that has held 51 shows in 22 different countries—seven of which are European nations such as Northern Ireland, England, Sweden, Russia, Slovenia, Romania and Belarus.“We have visited so many countries throughout our journey to help facilitate a global ecosystem for MMA. Our goal, apart from national sports development, is also to bring a positive change to MMA that will see the best talent from each country becoming global stars with talent being the only variable,” BRAVE CF president Mohammed Shahid stated."There are plenty of European fighters who are yet to be given an opportunity and we look forward to showing the excellence of European fighters to the world," the head honcho added.For 2021, Europe has been the center of BRAVE CF’s attention, kicking off the year with a stacked card in Sochi, Russia last January.The company upped the ante last June 4 by staging its maiden show in Minsk, Belarus, catering 11 high-octane bouts that managed to feature six up-and-comers from the host nation.On August 1, BRAVE CF will be breaking new ground, widening its footprint in the continent.With the foothold that BRAVE CF has already established in Europe, Swiss standout Kevin Ruart feels that Italian MMA could benefit the most from the promotion's forthcoming foray in Milan, Italy."BRAVE CF has top-level fighters on their roster that will keep you on the edge of your seat. Aside from that, they offer world-class production. Look at the events they held in the past. The production value is second to none. Truly marvelous," Ruart said.“Combining good cage action and world-class production, I think that's the brand of MMA the Italian people will have to watch and will turn them into fans of the sport. And BRAVE CF can offer that to them."Italian fans are in for a treat as their very own Enrico “The Killing Machine” Cortese gets the spotlight in the co-headliner as he squares off with Russian grappling wizard Rustam Chsiev. 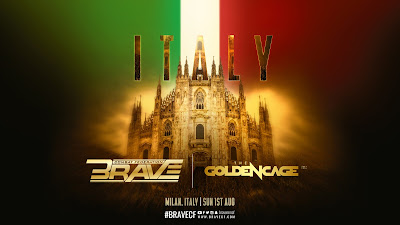 The rest of the explosive main card will likewise serve as a showcase for a host of the very best international talents in MMA.Former BRAVE CF Featherweight World Champion Elias “Smile” Boudegzdame will make his much-awaited return as he is slated to face France’s Brice “Lion Kid” Picaud.On the other hand, former BRAVE CF Welterweight World Champion Abdoul “Lazy King” Abdouraguimov looks to continue his ascent in his new division by locking horns with 2021 Knockout of the Year candidate Nursulton Ruziboev.Chechnya-born Swiss standout Husein Kadimagomaev is scheduled to battle Agshin “Warrior” Babaev of Azerbaijan, while 2020 BRAVE CF Breakout Fighter of the Year awardee Mochamed “The Beast” Machaev takes on Gamzat Magomedov.
Posted by Boy Raket at 10:00 AM