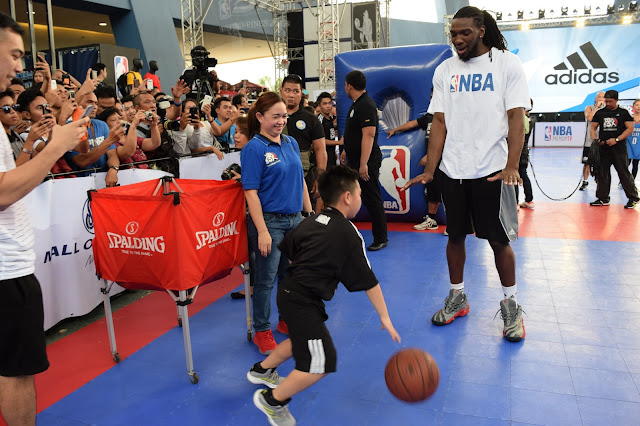 NEW YORK, Oct. 5, 2015 – The National Basketball Association (NBA) and TISSOT announced today a new multiyear global partnership that makes the Swiss watch brand the first Official Timekeeper of the NBA, Women’s National Basketball Association (WNBA), and NBA Development League (NBA D-League).
This marks the first Official Timekeeping partnership for TISSOT with a major North American sports league and the largest partnership in the company’s history of more than 160 years.  With the agreement, TISSOT adds to an already robust portfolio of international sports and sporting event partnerships.
TISSOT, the number one Swiss traditional watchmaker in terms of volume and a member of the Swatch Group – the world’s largest watch producer and distributor – will work with the NBA to develop a state-of-the-art integrated timing system.  The new precision timekeeping system, inclusive of TISSOT-branded shot clocks, will be implemented across all 29 NBA arenas beginning with the 2016-17 NBA season.
“TISSOT is very proud to join the NBA and to be able to create a bond with the players and the fans,” said François Thiébaud, President of TISSOT.  “The emotions and the spirit behind the sport will further translate into our products.  Our daily work is to dress time.  We create pieces of beauty and accuracy but above all of emotionality and that is what sport, and more particularly the NBA, is about.”
“In basketball every second – or even tenth of a second – can be critical, and this new partnership with TISSOT will bring state-of-the-art timing technology to every NBA arena,” said NBA Commissioner Adam Silver.  “We are proud to partner with TISSOT, a world-class brand with a long history of developing innovative and dependable timekeeping systems.”
Additionally, the watch company will receive global league licensing rights for timepieces, watches, clocks, and watch accessories for all NBA teams.  TISSOT will provide support for the partnership at its retail stores around the world.
The partnership will tip off this week during NBA Global Games 2015-16, which will feature six NBA teams playing seven regular-season and preseason games in six countries.  TISSOT will also become the Official Timekeeper and Official Watch of several marquee league events, including NBA All-Star, NBA Draft presented by State Farm, Samsung NBA Summer League, and NBA Global Games.
As part of the partnership, TISSOT will make investments across all NBA teams and league broadcast partners.  In addition, TISSOT and the NBA will partner on a global basis through events, marketing, media, and the launch of new NBA-themed creative and advertising.
About TISSOT
It's the Swissness at the very heart of TISSOT that makes the brand such a distinguished one.  The + in the TISSOT logo is the same as the Swiss flag, symbolising the quality and the reliability that watchmakers have proudly demonstrated since 1853.  The innovative brand remains in its home in Le Locle in the Swiss Jura Mountains, keeping its Swiss identity at its core.  TISSOT watches are authentic and accessible, using special materials, advanced functionality and meticulous design detail to create pieces that are both precise and stylish.  The high calibre of the brand has been repeatedly recognised, as in its illustrious history TISSOT has been named Official Timekeeper and Partner of MotoGPTM, FIM World Superbike, FIBA, AFL, RBS 6 Nations Rugby and the World Championships of cycling, fencing and ice hockey. TISSOT, which sells its timepieces in more than 160 countries round the world, is a member of the Swatch Group, the world's largest watch producer and distributor of Swiss watches.  As it continues to create pioneering creations, TISSOT stands by its signature, “Innovators by Tradition.”  www.tissot.ch
About the NBA
The NBA is a global sports and media business built around three professional sports leagues: the National Basketball Association, the Women’s National Basketball Association, and the NBA Development League.  The league has established a major international presence with offices in 13 markets worldwide, games and programming in 215 countries and territories in 47 languages, and NBA merchandise for sale in more than 125,000 stores in 100 countries on 6 continents.  NBA rosters at the start of the 2014-15 season featured a record 101 international players from 37 countries and territories.  NBA Digital’s assets include NBA.com and NBA Mobile, which achieved record traffic during the 2014-15 season, as well as NBA TV.  The NBA is the No. 1 professional sports league on social media, with more than 875 million likes and followers globally across all league, team, and player platforms.  Through NBA Cares, the league addresses important social issues by working with internationally recognized youth-serving organizations that support education, youth and family development, and health-related causes.
Posted by Boy Raket at 9:05 PM